Introduction
In Iran, students enter the medical student course after graduation from high school and passing the comprehensive entrance exam. Medicine is a 7-year course that includes basic sciences, semiology, physiopathology and internships (1).
During the medical course, the training curriculum for students mainly covers theory courses. Students are involved in clinical work and complete two separate one-month training courses in psychiatry rotation at the externship and internship level. In these courses, efforts are made to strengthen the basis of the theory of psychiatry courses and the principles of interviewing psychiatric patients and strengthening clinical skills. After graduating from the general medicine course, following the medical residency exam, the 4-year psychiatric residency course begins with a more profound emphasis on the principles of psychiatry. During the residency course, efforts are made to empower residents in the fields of psychiatric emergencies, child and adolescent psychiatry, geriatric psychiatry, consultation-liaison psychiatry, in-patient and out-patient adult psychiatry, psychotherapy and neurology rotations (2,3). Upon completing the residency course, residents must pass a written examination delivered by the Iranian Board of Psychiatry and Ministry of Health and Medical Education and an oral examination (A 20-minute interview with actual patients and evaluation of two or three examiners) in conjunction with Objective Structured Clinical Examination (OSCE) (4,5).
Medical students are assessed by various methods including global ranking scales, direct observation by seniors, verbal interviews, written exams, multiple-choice questions and  OSCE. Numerous studies have been conducted on how to evaluate medical students in Iran and the world. The results of a survey conducted at Bushehr University of  Medical Sciences, Bushehr, Iran showed that the most common method of student assessment is the use of descriptive and multiple-choice midterm exams (6). Multiple-choice tests are the most common type of written tests used in devising functional tests worldwide for about five decades. In Iranian universities of medical sciences, multiple-choice tests are the most common student evaluation tests (7).
Multiple-choice questions can assess a wide range of topic content in a short period. These tests are objective, accurate and can be easily scored, but they also have several limitations. For example, in such trials, students’ higher cognitive levels are often not assessed and there is a possibility of choosing the right option based on making a random guess. Sometimes, students have a misinterpretation and misunderstanding of the question that affects their response (8). Given that multiple-choice questions are the cornerstone of evaluation in medical education today, standardization has become very important to judge the appropriateness or quality of multiple-choice questions. Several guidelines have been developed to interpret the difficulty and the power of differentiation of questions (9).
The difficulty of the question is defined by estimating the percentage of the population for whom the test was designed and the percentage of correct answers. In fact, the difficulty is estimated more easily if more individuals ansewr to the question correctly. The difficulty of the question is assessed by relative and absolute approaches. In determining the relative difficulty, the difficulty of the question is ranked compared to the difficulty of other questions on the same test. In contrast, absolute difficulty refers to the actual percentage of people who answered the question correctly (10).
It seems that the ability to predict the difficulty and statistical characteristics of questions with the help of test experts can affect the quality of the test (10). Research shows that sometimes the judgment of test experts reflects problems related to questions or other scales which is not helpful (11); in fact, the results of studies on the ability of test experts to judge the difficulty of test questions are contradictory (12).
For example, in Sherman Tinkelman’s study, it was shown that test experts estimated the relative difficulty of questions better than the absolute difficulty of questions. They also overestimated the percentage of people who answered difficult questions and underestimated the percentage of easy questions (13). These discrepancies can be due to test experts’ opinions, experiences and thinking processes in estimating the difficulty of test questions (11).
Most studies raise challenging questions and research on discrimination coefficient measures is scarce and insufficient. Also, no study has been conducted so far on the ability of test experts to determine the difficulty and differentiation power of four-option multiple choice questions in an academic environment in Iran; therefore, due to differences in assessment of test experts  judging the quality of multiple-choice questions, conducting a study to evaluate their ability is essential. Therefore, this study examined the skills of faculty members at Psychiatry Department of Iran University of Medical Sciences to determine the difficulty levels and discrimination coefficient measures of multiple-choice tests.

Materials and Methods
The current research is a cross-sectional study in the field of education, which was done in 2017. In this study, all the faculty members of Psychiatry Department of Iran University of Medical Sciences entered the study based on the purposive sampling method. To conduct the research, test questions consisted of mid-term evaluation questions of the Department of Psychiatry at Iran University of Medical Sciences which were given to participants on May 27, 2017. First, the difficulty and discrimination coefficient of all 105 questions were measured by the software. To determine the software’s accuracy, the difficulty coefficient of several questions using a statistical formula was measured by hand and the obtained scores by the formula and those by the software were compared. The necessary information for applying the formulas was obtained from the university. Then, from each group of questions with high, medium and low difficulty coefficients, 10 questions (30 questions in total) were selected by simple random sampling using the random selection table. Together, these 30 questions made up the whole questions to determine the degree of difficulty and discrimination coefficient. Faculty members were asked to rate each question in terms of difficulty based on the Likert scale (difficult, medium, easy). Also, to check the discrimination coefficients of the questions, next to each question, columns were added with values ranging from 0 to 100 to distinguish residents’ knowledge. Finally, the correlation between faculty members’ evaluation and standard results obtained from the software and formula was measured using Spearman’s correlation coefficient.

Difficulty coefficient
The difficulty coefficient is by definition the percentage of the total number of test-takers who answered a question correctly and is denoted by the letter P. If all test papers were involved in the analysis of a question, it was sufficient to calculate the difficulty factor of the question by dividing the total number of people who answered the question correctly by the total number of test-takers and the result. Then, the result could be multiplied by 100 and the difficulty factor of the question was reached. In cases where the number of test-takers (Number of sheets) was high and our information was limited to how the upper and lower groups responded, it was necessary to use the following formula:
Difficulty factor=Correct choices of the lower group +Right choices of the upper group *100/Number of people in the top group+Number of people in the bottom group For selecting the top and bottom groups, the following procedure was done; if the number of our respondents was less than 20, after correcting, all the papers were arranged in the order of scores obtained from the first to the last person and were divided into two groups of strong and weak. The top and bottom groups were associated with low scores. If the respondents were between 20 and 40 people, 10 people were selected from the strong group and 10 people from the weak group, respectively and the people with middle scores were excluded And if the number of people was more than 40, 27% of cases for the top group were selected and 27% for the bottom group. The larger the difficulty factor of a question is, the closer to 100, the easier that question would be and the smaller the coefficient was, closer to zero, the more difficult the question would be. The optimal difficulty coefficient for a question, regardless of the type of question, is about 50% (Between 30 and 70%). A difficulty coefficient of less than 30% is considered difficult, between 30 to 70% is considered medium and more than 70% is considered easy (7).

Ideal questions
The combination of two coefficients of difficulty and purity of questions was used to show the ideal questions. Ideal multiple-choice questions have a difficulty coefficient of 30% to 70% and a discrimination coefficient of over 24% (7).
In this study, informed consent was obtained from all participants, and all participants’ data was collected confidentially. Final results were reported collectively (Not individually). This project was approved by the ethics committee of Iran University of Medical Sciences (IR.IUMS.REC1396.31760).

Table 1. Frequency distribution of difficulty coefficient and discrimination coefficient of all questions

Conclusion
The ability to predict the discrimination coefficient and difficulty of questions can lead to designing tests with higher standards and thus a better assessment of the achievement of educational goals. However, due to the impossibility of predicting the discrimination coefficient and difficulty of four-option multiple choice questions based on the findings of this study and similar studies, the use of various tests, including descriptive and ASCII tests is necessary to evaluate assistants/students, as well as to determine the difficulty of each test before giving them to participants; moreover,  applying the opinions of newly graduated teachers is a fundamental help which of course requires further research.
In general, the ability of faculty members and question designers in this area seems insufficient, so it is necessary to find influential factors and ways to strengthen them.

Acknowledgements
The project was approved by the ethcs committee of Iran University of Medical Sciences (IR.IUMS.REC 1396.31760).

Authors’ contribution
All the authors met the standards of authorship based on the recommendations of the Journal of Iranian Medical Council (JIMC).

Conflict of Interest
None declared. 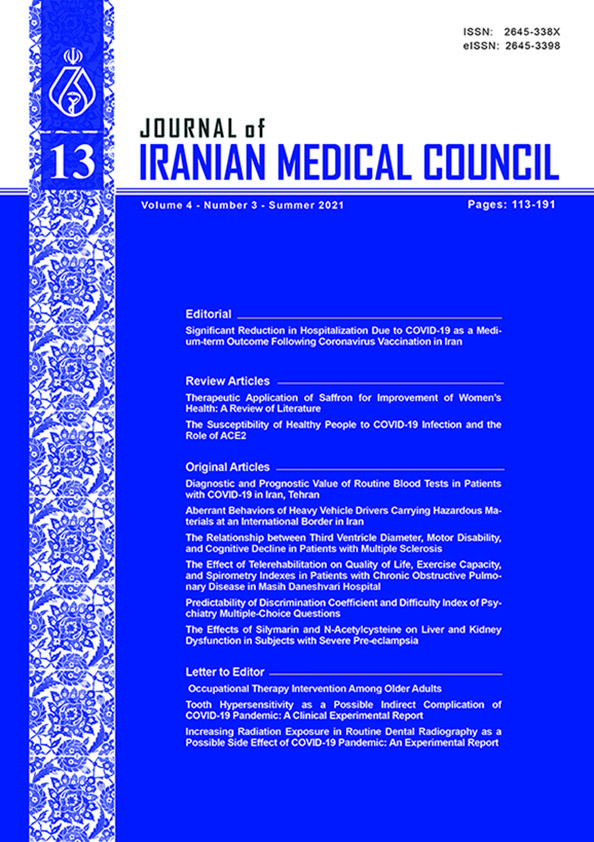