Abstract
Background: Autism Spectrum Disorder (ASD) is a developmental neurological disorder characterized by impaired social interactions. The aim of study was to examine the telepractice Prelinguistic Milieu Teaching (PMT) for ASD children.
Methods: This study followed a pretest–posttest design. 11 mothers of children with ASD aged 26-71 months (mean=47.09 months, SD=14) were included. Mothers were given the necessary training on the PMT for 12 one-hour weekly sessions, through the WhatsApp software. The self-reported McArthur-Bates communication development inventories (CDIs) was the main outcome measure. The data were analyzed using Wilcoxon test.
Results: Mean scores of expressive and perceptive words significantly improved after treatment with large effects sizes (Cohen’s d >0.8). The activity and gestures section scores showed significant improvements after treatment in the areas of communication gestures, play and routines, working with objects and imitation of adult activities (Cohen’s d >0.8).
Conclusion: This study provides preliminary evidence that the telepractice of PMT is effective for children with autism spectrum disorder. Further study with a rigours design is warranted.

Introduction
Autism Spectrum Disorder (ASD) is a developmental neurological disorder characterized by impaired social interactions and repetitive behaviors and stereotypes (1). Treatment services for the ASD children should be performed 15 to 25 hours per week for a period of two to three years (2). Children with ASD living in the remote areas have limited access to therapists and services in terms due transportation and costs (3-5). Therefore, they may not receive appropriate treatment in accordance with their developmental level. In the unexpected era of COVID-19, the Iranian government used quarantine to control the spread of the coronavirus. It follows that the patients needing rehabilitation services were restricted to the rehabilitation programmes as most of the rehabilitation clinics were closed. The limited access to skilled professionals and therapists for the evaluation and treatment of children with ASD emphasizes the role of their parents in the implementation of interventions for their children (6).
With the advancement of communication technology and the expansion of the internet, online and remote related medical and rehabilitation services for patients have been developed (7). The American Speech-Language-Hearing Association defines the telemedicine health services as the use of communication technologies from a distance for the therapist’s communication with the client or the therapist with the therapist to provide counselling, evaluation and intervention services (8). Accordingly, researchers are examining the potential of remote health services as a tool to provide interventions in the field of ASD.
There are studies using telemedicine health services in speech therapy in the areas of fluency disorders, dysphagia, language disorders, and speech sound disorders (9). Studies indicate that the use of remote technologies to provide early interventions for children ASD is effective (2,10). A study showed that the telepractice, like traditional face to face intervention for children with ASD, is valid and valuable (11). A further study concluded that parents in remote areas could successfully implement interventions and evaluation methods using telemedicine (12). On the other hand, involving parents in interventions for children increases their knowledge and improves the social and communication skills in children with ASD (13,14).
Prelinguistic Milieu Teaching (PMT) is one of the behavioural interventions used to improve communication in children with ASD. PMT teaches the children prelinguistic communication skills in everyday routines (15). This method is based on the transactional model of social communication development according to which social development and primary communication are facilitated bilaterally in the interaction between the child and environment (16). This method is used for children who do not yet use spoken language. PMT has been developed to promote gestures, vocalizations, and eye gaze behavior in young children with delayed prelinguistic communication development. The main goal of this method is to develop the basic communication skills that are necessary for language development. This method increases the frequency and complexity of nonverbal communication and vocalizations. The basic principles of PMT include arranging the environment to increase the child’s communication opportunities, following the child’s attention, and building the social routines that the child and the partner interact with each other (17). In most studies, PMT method is performed directly by the therapist or instructor in the clinic in one-on-one sessions with the child (18-21). Limited information indicates that the PMT is applicable by parents (22). The finding of these studies indicates that the PMT is effective in promotion of intentional communication (20,22-24), playing skills (20), spoken communication [19,25-27], object interest (28) and symbolic communication (20). There is no study on the effects of PMT using telepractice in children with ASD. Considering restrictions on the administration of patients in the rehabilitation clinics due to the COVID-19 virus pandemic and necessity of continued treatment of children with ASD, this study aimed to investigate the effects of PMT using telepractice in the management of children with ASD.

Materials and Methods
Study design
This study followed a pre-test/post-test design. The approval was granted from the Ethics Committee of Iran University of Medical Sciences. Participants gave their informed consent prior to initiation of the study.

Participants
Participants were mothers and their children with ASD. Inclusion criteria were: a) diagnosis of ASD established by a child psychiatrist b) normal hearing c) mother’s ability to speak and read Persian, d) willingness to participate in this study, e) lack of severe psychological and neurology disorders, f) the children were not receiving any other therapeutic intervention during the study period, h) The chronological age of children was ≤6 years.

Outcome measures
For this study, we examined three variables for analysis of child communication behaviour: expressive words, perceptive words and the activities and gestures. These variables were according to the MacArthur–Bates CDIs.
The MacArthur–Bates CDIs is one of the most parental based and widely used tools for assessing the early language and communication development (29). Parents or caregivers of young children fill in the MacArthur–Bates CDIs to indicate which words and or sentences from a prespecified list their children can already understand and/or produce. The MacArthur–Bates CDIs includes two forms, CDI-I and CDI-II. The CDI-I is designed to assess the vocabulary of comprehension and expression and to collect basic linguistic information; it consists of subscales for understanding vocabulary, vocabulary production, and gesture use (30). Separate scores were calculated for vocabulary production, understanding vocabulary and gestures. In section words produced, scores were calculated by summing the number of “understands and says” responses. In section words understood, a child’s score was calculated by adding the number of items marked either “understands” or “understands and says”. In section gestures, separate scores were calculated for all the subscales of gestures. Responses were credited that had marked either the “sometime” or the “often” category (31). The Persian translation of the CDI was used to assess the expressive and receptive vocabulary and gestures. The Persian version of the CDI-I has good validity and reliability (30).
Study procedure
The study was conducted in the summer of 2020. From a total of 25 families with autistic children referring to Chavan Center, 11 families were included according to the inclusion criteria. Then, the mothers of children with autism completed the second edition of Gilliam’s autism diagnosis scale. After obtaining the informed consent from the mothers, initial individual assessment was performed online. During a one-hour online video session, the mother was first taught how to complete the MacArthur–Bates CDI, then the checklist was filled in by the mothers in the presence of the therapist. After completing the questionnaire and conducting the initial assessments, parental training on treatment began remotely. We used video tape and oral explanation for teaching all parents. The therapy sessions were videotaped with the child’s mother. Mothers recorded the tutorials on WhatsApp to review it. There were 12 one-hour weekly therapy sessions for each mother, which were held through the WhatsApp software at the Speech Therapy Clinic.
During the intervention period, mothers were taught strategies on how to communicate with the child, identify and respond to the child’s communication clues, teach basic communication skills (such as imitation, queuing, joint attention and play), facilitate understanding and comprehension strategies, and teach traditional gestures to their child. In each session, two or three of the skills mentioned above were explained to mothers the way to perform them. During the week, mothers were asked to work with their child on the required skills, video film their child’s performance and send it to the therapist for evaluation. The videos were reviewed by a therapist to improve the quality of performance of mothers in treating their children. In the weekly sessions held, each mother presented a documented report on the treatment process and possible challenges and received the guidance from the therapist if necessary. After 12 sessions, mothers were asked again to complete McArthur-bates CDI based on their child’s communication and language characteristics.

Statistical analysis
The data were analysed using SPSS 26 software. Mean and standard deviation were calculated for quantitative variables and frequency for ordinal and nominal variables. Due to the small sample size, Wilcoxon test was utilized for analyses. Cohen’s d was used to calculate the effect size of treatment. The magnitude of Cohen’s d was interpreted as small (0.2), medium (0.5), or large (0.8) (33). The significant level was set at ≤0.05.

Table 2. Scores on the expressive words and perceptive words

Table 3. Scores on the subtests of the activities and gestures

Discussion
The aim of this study was to investigate effects of telepractice of PMT for children with ASD. All children with ASD improved after intervention on play skills, basic inventory communication skills, and communication form with using gestures.
The expressive and perceptive words improved after treatment with large effect sizes. Improvements in expressive and perceptive words after the intervention are consistent with the results of the previous studies (19,26,27,33). The reasons for improvement after intervention could be the skills enhanced such as symbolic play, nonverbal communication, and imitation that all are necessary for language acquisition (34). Also, the use of communicative means (e.g., gaze, gestures) could help provide a strong foundation for facilitating the language development (35). It follows that the intervention using the prelinguistic communication skills may help children with delays or disabilities to become effective intentional communicators (22).
We found large effect sizes of PMT on play and routines, communication gestures, working with objects, and imitating adult activities which are consistent with the results of previous studies (20,22,25,28).
The mean scores for pretending a mother or father and symbolic substitutes did not improve after the intervention. Possible reason might be that the gestures such as pretending to be a mother or father appear later in life than other gestures (36).
The PMT using telepractice improved the imitation skills, nonverbal communication such as the use of gestures, and play in children. These findings are consistent with the results of previous studies in which the PMT was administered by the therapist at the clinic (19,30,31,37). Improvements might be that the implementation of PMT using telepractice allowed parents to be more involved in the intervention process and thus provided more opportunities for the child to be an active learner. Our findings are in agreement with previous reports that parental involvement in the treatment improves the communication skills of children with ASD (37-40).
The small sample size and the lack of a control group are the limitations of this study. Further study is warranted with a larger sample size and comparator group to confirm the findings of the present study.

Conclusion
This study provides preliminary evidence that the telepractice using the PMT may be beneficial for children with ASD.

Acknowledgements
This study was conducted at Iran University of Medical Sciences (IR.IUMS.REC.1399.849), Tehran, Iran. We are grateful to the Center of Chavan for their supports and would also like to thank all of children and mothers who participated in this study.

Conflict of Interest
The authors declared that they have no conflict or competing interests. 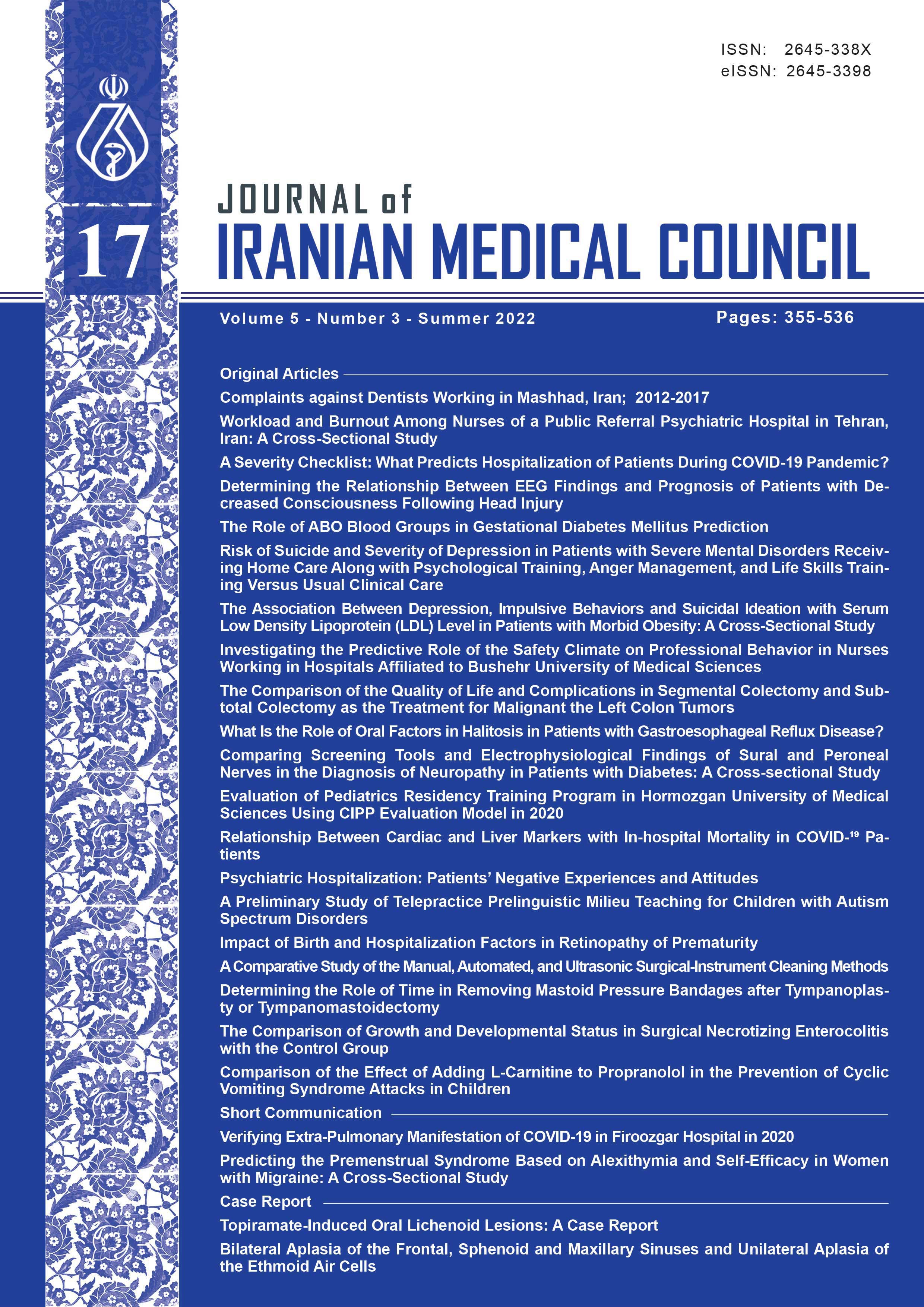