Background: Although the population growth in Bushehr Province is high, only few studies have been conducted on the prevalence of mental disorders among children and adolescents. This article aims to investigate the prevalence of psychiatric disorders among children and adolescents in Bushehr province that has second population growth in Iran.
Methods: This was a cross-sectional study in which the eligible subjects were 6-18 years old children and adolescents selected using the stratified random cluster sampling from rural and urban areas of Bushehr. The Persian Version of K-SADS-PL was used by trained clinical psychologists to diagnose mental and psychiatric disorders.
Results: A total of 1037 cases consented and completed the survey. They were categorized into 3 age groups; 6 to 9, 10 to 14 and 15 to 18 years old containing 34, 33.7 and 32.3% of all. Up to 11.6% of cases including 10.2% of boys and 12.9% of girls were detected to have any kind of diagnoses through interviews with children and their parents using K-SADS-PL questionnaire. These 120 patients embraced 11.6, 9.2 and 14% of each age group, respectively. Among 120 cases with psychiatric diagnoses, anxiety disorders as a whole were the most frequent psychopathology, affecting up to 5.4% of total population.
Conclusion: About 1 out of 10 children and adolescents in Bushehr has any kind of psychiatric disorders. The prevalence of mental disorders was higher in girls and in adolescents.

According to statistics presented by United Nations under the title of world population prospect, Iran is the 18th most populous country all over the world by estimated population of 81 million in July 2017 1. The mid age has been reported 30 in urban areas, 28 in rural areas and 30 in total population. According to the reports of national Statistical Center of Iran, the first age group of 4, that includes population aged up to 14, exceeded 45% of total population in 1986, while it has decreased to 24 percent in 2016 2. However, although the ratio of this group has reduced for more than 21%, its total population did not diminish for more than 3 million, because of raw population growth. Bushehr is the 23rd populous province of Iran; however it has the second level of population growth and predicted to face a great increase in the population of children and adolescence during coming years 2.

The investigators of this study designed a local survey to investigate the prevalence of mental and psychiatric disorders among Bushehr ’s children and adolescents, and their comorbidities.

This population-based study was designed in a cross sectional form based on the stratified random cluster sampling to draw the profile of psychiatric disorders among children and adolescents in Bushehr. According to census of 2016, Bushehr Province’s population was 1,161,400 that up to 68.2% were residents of urban areas. The population density of this province had been 51/km 2, and Bushehr has the second rate of population growth among all of the provinces in Iran 2. The study was conducted in the capital city of this province and its suburb rural areas. To achieve a uniform random distribution in the areas under study, the sampling was administered through postal code with the help of post office in both urban and rural areas. The cases were chosen among Iranian citizens who were between 6 to 18 years old and resided for at least one year at Bushehr Province (inclusion criterion). The children and adolescents affected by severe physical disorders were excluded (exclusion criterion).

Two main questionnaires were used in this survey; (1) a self-report semi-structured questionnaire to gather familial and demographic information included age, gender, residential area, parental job and parental education levels. (2) Kiddie Schedule for Affective Disorders and Schizophrenia (K-SADS-PL) to detect psychiatric disorders in children and adolescents. The K-SADS is a screening tool for detection of childhood and adolescence mental disorders. This semi-structured instrument which is created to assess children aged 6 to 18, has 4 versions. The Present and Lifetime Version (KSADS-PL) of this inventory has been firstly presented by Kaufman, Birmaher, Brent, Rao and Ryan in 1996 and is used in our study 7. This comprehensive instrument is efficient in screening a great variety of psychopathologies including Major Depressive Disorder, Mania, Bipolar Disorders, Schizophrenia, Schizoaffective disorder, Obsessive Compulsive Disorder, Generalized Anxiety Disorder, Eating Disorders, Attention Deficit Hyperactivity Disorder, Conduct Disorder, Post Traumatic Stress Disorder, etc. This version consists of six parts: Unstructured Introductory Interview – Developmental History that asks about basic information such as birth and developmental history, previous and current physical and mental problems, and relations with friends, family members and schoolmates. The second part is Diagnostic Screening Interview that assesses serious symptoms since past so far, by scoring protocol and probes. The next part is Completion Checklist Supplement for screening of rest of the disorders. Appropriate Diagnostic Supplements seeks for the existence of symptoms for non-psychotic non-affective disorders. The fifth section which is Summary Lifetime Diagnosis Checklist summarizes the data extracted by previous parts. The last part is Children’s Global Assessment Scale for investigation of child’s functionality. The reliability and validity of this semi-structured questionnaire has been first confirmed by Kaufman et al 7 who reported a test-retest reliability of 0.77-1.00 and the inter-rater agreement of 93-100% for lifetime and present diagnosis of psychiatric disorders. However, the Persian Version of K-SADS-PL was used in our assessments. The acceptable characteristics of Persian Version of KSADS-PL among Iranian children have been proven by Ghanizadeh et al in 2008 8. The reported test-retest and inter-rater reliabilities for the Persian version of K-SADS-PL were 0.56-0.81 and 0.69, respectively 8. Moreover, other reliable instruments were used to distinguish mental retardation, epilepsy, and tobacco use.

Eight clinical psychologists trained by a psychiatrist to complete the K-SADS-PL were referred to the houses. After describing the study protocol and consenting to participate, children and their parents were involved into the study. Interviews were conducted by two interviewers with children and their parents simultaneously, especially with their mothers, and a summary rating was entered according to the agreement of two interviewers. The readers can refer to the study protocol, which is previously published, to find more details about the method of implementation of this survey 9. After gathering information, data were entered into the SPSS software (version 20, IBM Corporation, United States) and analyzed using descriptive and analytical statistics. The study was funded by the National Institute for Medical Research Development (NIMAD, grant No. 940906).

All the parents and adolescences aged 15 and above studied and signed consent forms describing the purpose of our project and its potential beneficial effects on public mental health. They were informed that their personal information will remain confidential, and they can quit the assessments if they found it undesirable. The team was committed to treat the cases that obtained psychiatric diagnoses following the evaluations, free of charge, or refer them to other experts, based on their will. The ethics review board in the NIMAD has approved the study protocol (the ethics code: IR.NIMAD.REC.1395.001).

The educational status of parents was recorded by a sequential grading scale, including: Illiterate, Primary school, Guidance & high school, Diploma, Bachelor, and master degree or above. The most frequent degree among both of the parents was high school diploma, by 34.3% of mothers and 29.4% of fathers. The least frequent educational levels were illiteracy among fathers (4.2%) and Master degree or above among mothers (3.6%). The most frequent educational level among fathers and mothers were ‘bachelor’ and ‘high school diploma’.

Considering the occupational issues, 46.4% (n=469) of fathers and 11.1% (n=113) of mothers were employed in public/governmental organizations, while 51.3% (n=518) and 3.3% (n=34) of them worked in private businesses. Only 2.3% of fathers (n=23) were unemployed, however up to 85.6% of mothers (n=827) worked as housewives. The highest frequencies of psychiatric disorders in children were among who had unemployed fathers or mothers working in governmental organization, versus lowest prevalence among the children of fathers occupied in public sectors or mothers working in private businesses (Table 1).

Among 120 cases with psychiatric diagnoses, anxiety disorders as a whole were the most frequent psychopathology, affecting up to 5.4% of total population. The subgroups of this category were separation anxiety, social and specific phobias, obsessive compulsive disorders, agoraphobia, generalized anxiety and post-traumatic stress disorder, sorted from highest to lowest prevalence.

After enuresis that was the second frequent complaint among children, behavioral disorders and neuro-developmental disorder reached 3rd (3%) and 4th (2.9%) places. The category of behavioral disorders contained attention deficit hyperactivity, conduct oppositional defiant and tic disorders respective to decrease of prevalence. The category of neuro-developmental disorder included mental retardation and epilepsy. The substance abuse, mood disorders and psychotic disorders were the least prevalent categories by affecting 1.3, 0.7 and 0.4% of cases, respectively (Table 2).

The prevalence of comorbidities has been also investigated. The most common comorbidity of anxiety disorder is enuresis (14.3%) while anxiety itself is the most frequent comorbidity of behavioral and neurodevelopmental disorders (Table 3, Figure 1).

Anxiety disorders were the most prevalent disorders among the children and adolescents of Bushehr, which is similar to the findings of Khaleghi et al. However, most previous studies 5,6,12-16 reported Attention Deficit Hyperactivity Disorder (ADHD) as the most commonly diagnosed disorder in children and adolescents, Which was estimated at only 1.3% in our study. For example, Molavi et al, Alavi et al and Moharreri et al reported a prevalence rate of 12.5, 8.6 and 5.8%, respectively, for ADHD. This difference is probably due to either the socioeconomic differences between the provinces or underestimation of prevalence of ADHD in our study caused by the instruments used and the subjectivity of interviewers. Moreover, anxiety disorders had a high comorbidity with other mental problems. Youth with mood disorders and psychotic disorders were highly vulnerable to anxiety disorders. This observation has also been reported by previous studies 11,17-20. Furthermore, according to the comorbidities results, children and adolescents with behavioral disorders are more vulnerable to substance abuse disorders.

Our results demonstrated that place of residence plays an important role in the mental health profile of Bushehr, so that almost all cases with psychiatric disorders were found in urban areas. This finding is consistent with the results of other epidemiological studies that have been conducted in Tehran 11 as well as other countries such as United States 21, Brazil 22,23 and China 24. It is suggested that serious stimuli and challenges that affect subjects, especially children and adolescents, in large cities may result in a higher prevalence of mental disorders in urban areas than in rural settings 3,21. Meanwhile, the prevalence of mental disorders among girls was higher than that of boys. Also, adolescents (15-18 years old) were more affected by psychiatric disorders than other age groups. These observations are not consistent with the findings of similar studies that have been conducted in Tehran 10,11. This difference can be due to cultural and socioeconomic differences between Bushehr and Tehran. Moreover, our results revealed that low parental education levels may play a role as a risk factor related to the psychiatric disorders in children and adolescents, as previous epidemiological studies in Iran and other countries have been also stated 5,6,25-27. Furthermore, according to the results, parental occupational situations were associated with the mental disorders in children and adolescents.

The estimated prevalence of psychiatric disorders among pediatric population in Bushehr province, justifies particular attention to mental health while making medical policies. The increased rate of disorders in adolescence indicates that screening and early detection of psychopathologies, may diminish the imposed familial, financial and social burden of them. Greater studies concentrated on risk factors, including genetic and familial, social and financial elements can be beneficial in creation of preventive strategies and risk factor oriented screening protocols.

Hereby we thank all the families and the children who participated in this survey. We also thank the National Institute for Medical Research Development (NIMAD) (Grant No. 940906), Bushehr University of Medical Sciences and the Psychiatry and Psychology Research Center, Tehran University of Medical Sciences for their financial and non-financial supports. 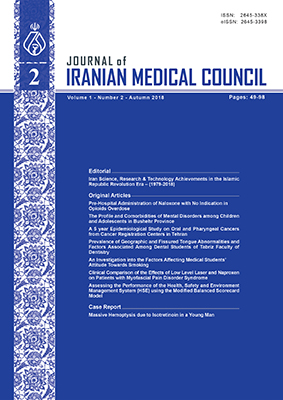