Ectopic eruption of teeth is a rare phenomenon, when teeth are found outside their regular site of eruption. This condition is quite rare in non-dentate regions such as maxillary sinus, nasal septum, mandibular condyle, coronoid process and the palate. The most typical symptomatic presentation of this condition is facial pain. Most of the reported cases of ectopic eruption are permanent third molars and only few cases of ectopic deciduous tooth have been reported in the literature. The purpose of this study is to report a case of ectopic deciduous molar tooth in maxillary sinus in a 13-year-old patient with no related signs and symptoms.

Abstract
Ectopic eruption of teeth is a rare phenomenon, when teeth are found outside their regular site of eruption. This condition is quite rare in non-dentate regions such as maxillary sinus, nasal septum, mandibular condyle, coronoid process and the palate. The most typical symptomatic presentation of this condition is facial pain. Most of the reported cases of ectopic eruption are permanent third molars and only few cases of ectopic deciduous tooth have been reported in the literature. The purpose of this study is to report a case of ectopic deciduous molar tooth in maxillary sinus in a 13-year-old patient with no related signs and symptoms.
Keywords: Deciduous tooth, Ectopic tooth eruption, Maxillary antrum, Primary dentition
Introduction
Eruption of teeth in locations distant from their regular site of development is called ectopic eruption (1). In clinical practice, ectopic eruption is often observed within the dentate region, but such a condition in the non-dentate areas like maxillary sinus is very rare (2). In addition, ectopic deciduous tooth is quite rare during the development of primary dentition. To the best of our knowledge, there was only one reported case in the literature regarding ectopic deciduous tooth in the maxillary sinus (3). According to a recent study by Lombroni et al, they found 51 cases with ectopic teeth in the maxillary sinus, of which 53% were female, with mean age of 28.36 years. The youngest and oldest patients were 3 and 72 years, respectively. Most of the reported cases of ectopic eruption were third molars and there was no report of deciduous tooth in maxillary sinus. Based on the position, the number of cases in the right and left sinuses was almost equal and they occupied different sites of the sinus such as antrum, floor, root, superomedial and anterosuperior aspects, and posterior and anterolateral walls (4). This condition may emerge due to the developmental discrepancies such as cleft palate, genetic factors, trauma, rhinogenic or odontogenic infections, pathological processes like large cysts which displaced tooth buds to the various areas, and iatrogenic events (3-5). The ectopic tooth in the maxillary sinus may be asymptomatic for years until patient undergoes radiographic examination for any reason; however, it may lead to sinusitis, oro-antral fistula, headache, facial pain, nasal obstruction, and swelling of the face (6,7). The purpose of this report is to present a case with total impaction of the second maxillary deciduous molar in the maxillary sinus and clinical missing of the second premolar.

Case presentation
A 13-year-old male patient was referred to our radiology clinic with eruption failure of the permanent maxillary right second premolar tooth (#4 in universal system), while the contralateral second premolar was erupted at the age of 12. Patient had no related symptoms in the right side of face. No signs of redness or swelling of the overlying mucosa was observed in intraoral examination and the medical history of patient was non-contributory. Panoramic radiograph revealed signs of an ectopic tooth in maxillary sinus. CBCT scan was performed with Scanora 3D (Sordex, Finland, FOV 6 x 6 cm, voxel size 150 µm) for further investigation. The second premolar was detected as an impacted tooth in contact with apical third of root of the first premolar. The impacted tooth was reduced in size (microdontia) and had caused root resorption of the first premolar. CBCT reports also represented a small odontoma adjacent to the impacted second premolar. A round radiopaque entity was detected in follicular space of un-erupted right third molar, as an incidental finding (Figure 1). Examination of the maxillary sinus revealed the presence of ectopic primary second molar attached to the anterior and medial walls of the right maxillary sinus, with severe internal resorption (Figure 2). Patient was referred to the oral and maxillofacial surgeon and orthodontist. The ectopic tooth was planned to be extracted under general anesthesia. Although the patient was explained about the consequences of retaining the impacted ectopic tooth in the sinus, his parents refused the treatment plan and therefore, the patient was advised to be on regular clinical and radiographic follow-ups.

Discussion
Formation of deciduous tooth starts as early as 6th week intra-uterine with the development of dental lamina. Then the ectodermal layer proliferation begins to form the permanent dentition between 5th and 10th post-natal months (2). It is a complex and multistep event in which the interaction between the oral epithelium and the underlying mesenchymal tissue plays a vital role. Therefore, any abnormal tissue interaction during odontogenesis may result in ectopic tooth development and eruption (2,6). Terms ectopic and impacted are referred to as two different types of tooth eruption disturbances, sometimes used incorrectly and interchangeably. Dental impaction focuses on inability of eruption, and ectopic tooth is referred to as abnormal position of development (8).
Suggested factors possibly involved in submersion of deciduous teeth are anklyosis, congenitally missing permanent teeth, defects in the periodontal membrane, trauma, injury of the periodontal ligament, precocious eruption of the first permanent molar, defective eruptiveforce, or a combination of the sefactors Permanent, supernumerary and primary teeth may develop in maxillary sinus as ectopic tooth, (9) but presence of ectopic deciduous tooth is extremely rare. Etiology of this condition can be multifactorial with both general and local factors such as abnormal position of the tooth bud, defects in the periodontal membrane, trauma, injury of the periodontal ligament, iatrogenic origin, congenitally missing permanent teeth, odontogenic tumors, cleft lip-palate or a combination of these factors (2,3). Wang et al reported a case of impacted primary molar, in maxillary sinus of a patient with cleft lip/palate. On long-term radiographic follow-ups, they observed resorption of the affected tooth (10). Development of tooth in maxillary sinus could be explained by the history of cleft lip/palate. In the current study, we present a case with clear familial history, but severe internal resorption of dental structures was evident in our case as in the case reported by Wang et al.
In addition, it is mentioned that the occurrence of ectopic teeth may be due to aberrant processes related to the extension of dental ridge into regions beyond the alveolar process such as palate and maxillary sinus, possibly since the jaw bones are the natural origins of teeth and the palate and maxillary sinus are anatomically proximal to the alveolus. On the other hand, ectopic teeth may be in association with abnormal development of the dental lamina and tooth germ. The tooth bud is composed of dental lamina ingrowth and mesenchymal tissue concentration. Mesenchymal tissue in the jawbones is derived from neural crest cells that migrate from the caudal area of the mesencephalon and the cranial area of the metencephalon. Hence, it can be hypothesized that a discrepancy in the migration of neural crest cells can result in the formation of a tooth bud located far from the normal position (11).
In recent years, many genes related to ectopic eruption of teeth have been described. Blackburn et al reported that excess NF-κB induces ectopic odontogenesis in the embryonic incisor epithelium (12). In this regard, Ray et al also stated that the presence of ectopic teeth in the inferior nasal concha may be related to the ectopic expression of Sonic Hedgehog (SHH) or Bone Morphogenetic Proteins (BMPs), leading to the formation of ectopic tooth germs (13). However, the specific genetic and signaling pathways related to the occurrence of ectopic teeth are not clear.
Ectopic tooth in the maxillary sinus may be symptomatic or asymptomatic. Chronic or recurrent sinusitis or purulent discharge from the nose and sometimes elevation of the floor of the orbit has been reported in symptomatic patients (2,5,6). Utilizing panoramic and periapical views, Gündüz et al reported a case of total impaction of deciduous maxillary molar within bone at the level of maxillary sinus. The patient complained of spontaneous and repetitive episodes of pain. They reported small communication with antrum, noticed during surgery (3). The case studied in this paper is an asymptomatic ectopic primary tooth, completely enclosed within the sinus, attached to anterior and medial antral walls. Due to the limitations of conventional images and higher accuracy of computed tomographic scans in localizing ectopic teeth and possible associated pathoses, (9) CBCT scan was used  in current case to assess the ectopic tooth in all dimensions. Cystic changes are the most significant complications of the impacted teeth. In this regard, dentigerous cyst is the most common dental follicular cyst. It always comprises crown of an impacted, embedded or un-erupted tooth, but sometimes it may be in association with an odontoma (2).
The treatment of an ectopic tooth is determined by the size and the location of the tooth. The acceptable treatment is surgical excision which can be carried out through traditional Caldwell Luc approach, or more conservative trans-nasal extraction or endoscopically-assisted extraction.
In conclusion, ectopic presentation of deciduous teeth is a rare condition, and few cases have been reported in the literature. The condition generally affects maxillary deciduous molar least often.

Data availability
The data used to support the findings of this study are available from the corresponding author upon request.

Ethical approval
Informed consent was obtained from parents regarding the publication of radiographs.

Acknowledgements
None.
Conflict of Interest
The authors declare no conflict of interest. 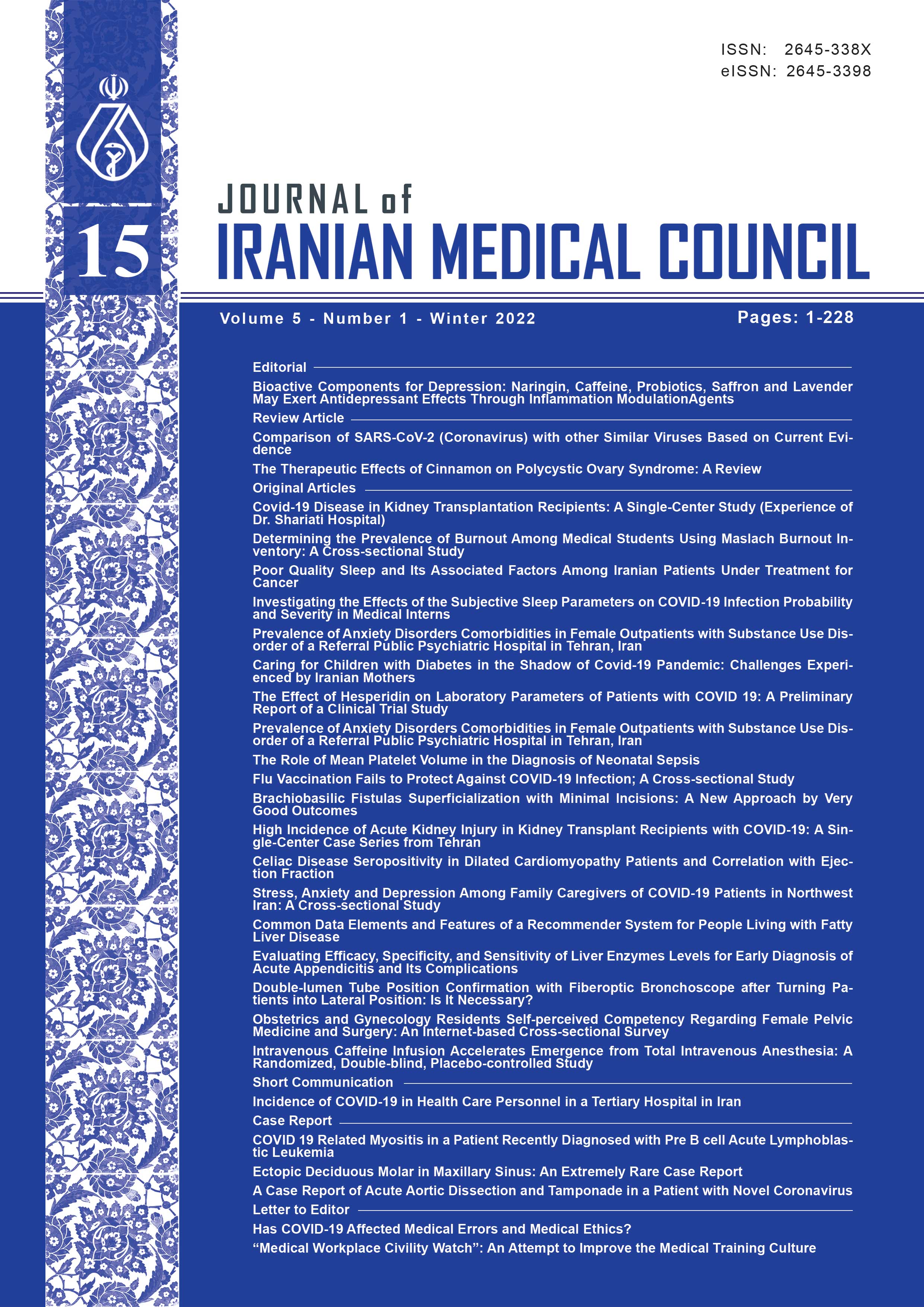