Noncyclic Mastalgia: A Chronic Pain Syndrome Needed to be Evaluated in A Multidisciplinary Approach

Background: Mastalgia as a chronic pain syndrome and its association with psychological disorders has not been fully addressed.
Methods: All women with non-cyclic mastalgia attending to our center were screened for psychological disorders using General Health Questionaire-28 (GHQ 28) and those with score > 23 were referred to the psychiatry clinic.
Results: 60 patients were evaluated. Duration of mastalgia (month), days with pain in one month and duration of pain from onset to relief (minute) were 14.35±18.61, 13.01±7.36, and 79.23±180.82, respectively. Bilateral (43.33%), intermittent (58.33%), and radiating (58.34%) pain improved spontaneously (48.33%) was the most common characteristic of mastalgia. Mean GHQ score was 27.36± 12.7 and 50% of the patients had GHQ>23. Major depressive disorder (35%), mixed anxiety and depression disorder (26.66%) and general anxiety disorder (21.66%) were three leading diagnoses.
Conclusion: It is required to respond to patient’s psychological disorder to reach sustain therapeutic results.

Abstract
Background: Mastalgia as a chronic pain syndrome and its association with psychological disorders has not been fully addressed.
Methods: All women with non-cyclic mastalgia attending to our center were screened for psychological disorders using General Health Questionaire-28 (GHQ 28) and those with score > 23 were referred to the psychiatry clinic.
Results: 60 patients were evaluated. Duration of mastalgia (month), days with pain in one month and duration of pain from onset to relief (minute) were 14.35±18.61, 13.01±7.36, and 79.23±180.82, respectively. Bilateral (43.33%), intermittent (58.33%), and radiating (58.34%) pain improved spontaneously (48.33%) was the most common characteristic of mastalgia. Mean GHQ score was 27.36± 12.7 and 50% of the patients had GHQ>23. Major depressive disorder (35%), mixed anxiety and depression disorder (26.66%) and general anxiety disorder (21.66%) were three leading diagnoses.
Conclusion: It is required to respond to patient’s psychological disorder to reach sustain therapeutic results.
Keywords: Anxiety disorder, Chronic pain syndrome, Mood disorder, Noncyclic mastalgia, Psychological disorder

Introduction
Mastalgia is a prevalent complaint among females, especially in the reproductive age (1,2). It is a major cause of admissions to breast clinics (3). This issue, not only interferes with daily activities of this group, but is also the main cause of concern about cancer in females (4). There have been many investigations about the nature and causes of cyclic mastalgia. The relationship of cyclic mastalgia in context of premenstrual syndrome has been well described in the literature and seems to be associated with hormonal disturbances (5). Other causes of mastalgia include structural abnormalities, such as cysts, trauma, previous surgeries, disturbances in fatty acid metabolism, drugs, large breast size, and psychological disorders (5,6). There are many investigations studying the relationship of cyclical mastalgia in premenstrual syndrome with psychological symptoms (7). However, the role of psychological disorders, especially mood disorders, in patients experiencing non-cyclical mastalgia, is not well understood. Experimental studies have demonstrated the relationship between psychological disorders and non-cyclical mastalgia and it seems that there should be a strong relationship between these two entities. This relationship was investigated in this study.

Materials and Methods
In a cross-sectional study conducted during a time period of six months from May to October 2017, all females admitted to the general surgery clinic of Ziaean Hospital, Tehran University of Medical Sciences, Tehran, Iran with complaint of non-cyclic mastalgia were included in the study. The inclusion criterion was confirmed non-cyclic mastalgia based on the patients’s history. The exclusion criteria were recent surgery of the breast, palpable mass in the breast, history of hormone replacement therapy, breast infection, and any suspicious pathology at imaging. Appropriate imaging (ultrasonography, mammography and Magnetic Resonance Imaging (MRI)) was performed for all cases to rule out other pathologies.
For all female participants, the following variables were recorded: age, educational attainment based on International Standard Classification of Education 2011 (8), marital status, menstruation status, location of pain (right, left or bilateral), duration of mastalgia (by month), duration of pain from onset to relief (by minute), quality of pain (squeezing, burning or radiating), radiation location, and worsening or relieving factors. Institutional Review Board and Ethics Committee of Ziaean Hospital approved the study protocol (IR.TUMS.REC.1394.458).
After obtaining a written consent, the General Health Questionaire-28 (GHQ-28) (9) was recorded for all patients. GHQ-28 is a self-report questionnaire that is used as a screening tool for psychological wellbeing. The GHQ-28 identifies two main concerns: (a) the inability to carry out normal functions; and (b) the appearance of new and distressing phenomena. The GHQ-28 consists of 28 questions designed to identify whether an individual’s current mental state differs from his/her typical state. Patients with GHQ-28 score of more than 23 were referred to psychologists to be evaluated for anxiety and mood disorders. Diagnosis of psychiatric diseases was made by a structured clinical interview for DSM Ⅳ.
Categorical variables are shown as frequency and relative frequency, and continuous variables are indicated as mean (standard deviation). Categorical variables were compared using the chi-squared test. An independent student t-test was utilized to compare means between the two groups. All analyses were performed by the two-sided method using Statistical Package of Social Science software IBM SPSS STATISTICS 22 (IBM Inc, New York, USA), and the p-value of < 0.05 was set as statistically signiﬁcant.

Results
60 patients with mean ± SD age of 40.45 ± 10.15 years (range: 21 to 69) years were evaluated. Educational attainment distribution of these females is shown in table 1.
Analysis of marital status showed that 95% of the patients were married and 5% were single. Considering employment condition, 90% were housewives whereas 10% were employed. Investigation of menstruation status revealed that 70% of the study group were premenopausal and 30% were postmenopausal females. Pain specifications of these patients is summarized in table 2.
Mean GHQ score of the patients was determined as 27.36 ± 12.7 (range: 2 to 57) and 50% of the cases had GHQ > 23 (suspected to have psychological disorders). Six patients among this group refused further evaluation; however, psychological history taking and interview of the remainder revealed that 23 patients (38.33% of total) had at least one psychiatric problem (Table 3).

Table 2. Characteristics of mastalgia in the study population

Table3. Distribution of psychiatric disorders in the study population

Discussion
Mastalgia is usually overvalued by patients and they may consider it as the symptom of underlying malignancy (10,11). However, it has been investigated that this symptom by itself is rarely related to organic pathology, although there were cases of breast cancer, which presented isolated mastalgia (12). The current literature suggests that history taking and precise clinical examination are the first and usually the only evaluations required to exclude cancer susceptibly in patients with mastalgia (13). French College of Gynecologist and Obstetricians (14), has advised against using imaging modalities and proposed to treat females with isolated mastalgia in the same manner as asymptomatic patients. In a systematic review study by Martín-Díaz et al (15), the authors were unable to find strong evidence on the importance of using imaging modalities for isolated non-cyclic mastalgia in females over 35 years old; yet they recommended further evaluations of those who had risk factors of breast cancer. This approach is generally accepted by patients and cancer fear may be vanished if the patient is reassured based on the clinical evidences (16,17). However, in many other cases, the mastalgia becomes a dilemma influencing their lives, mainly sexual function, physical activity, social affairs, and work/school performance (18).
In this study, the researchers showed that 38.33% of the study population had at least one psychological problem such as major depressive disorder (35%), general anxiety disorder (21.66%), and obsessive compulsive disorder (11.6%), further evaluation of which showed that in some cases, patients developed a combination of mood and anxiety disorders (26.66%). Eryilmaz et al (19), reported depression (66%) and anxiety (34%) as the most prevalent and somatoform disorders (4%) and panic disorder (2%) as the least common problems among their study population. An interesting finding of Eryilmaz et al’s (19) study was a negative significant correlation between Beck Depression Inventory (BDI) and quality of life assessed using the SF-36 questionnaire. They reported that a patient with mastalgia fails to perform daily routines as the severity of mastalgia becomes worse (19).
Yilmaz et al (20), compared a group of 55 premenopausal females with mastalgia and 51 healthy females using BDI, Beck Anxiety Inventory (BAI), and Temperament and Character Inventory (TCI) in order to assess anxiety and depression levels and personality traits of patients with mastalgia. They reported that the scores of both BAI and BDI were higher in the mastalgia group indicating higher anxiety and depression. Analysis of TCI results (which is used to evaluate personality traits) revealed that harm avoidance, self-directedness, and self -transcendence scores are significantly higher in the mastalgia group, while cooperativeness score of mastalgia group is significantly lower. The results of TCI are better comprehended if one pays attention to characteristics of each domain. Harm avoidant individuals are known to be socially inhibited, easily fatigued, and anxious (21). Patients with low self-directed individuals are help seeking, irresponsible, and insecure (21). Individuals with low self-transcendence scores tend to be objective, selfish, and grandiose (21). Individuals with low cooperativeness scores tend to be cold and hostile against others (22).
Other studies like Ader et al (2), Johnson et al (6), and Jenkins et al (23), demonstrated the significant association of psychiatric disorders, mostly depression, anxiety, and somatoform disorders, with mastalgia. These authors supported that psychiatric evaluation should be a part of the management of mastalgia.
The current study had two main limitations. First, the number of attending patients was low, which makes it difficult to obtain confident results and feeds the urge to perform further studies with large number of patients and control group. Second, the researchers were unable to follow patients in order to observe the effect of psycho-medical therapy on mastalgia. The association of mastalgia and other chronic pain syndromes should be assessed as well.

Conclusion
Considering the prevalence and the burden of mastalgia on patient’s activity, a multi-disciplinary approach should be adopted. Carful history taking and clinical examination to roll out possible underlying pathologies should be applied. In this regard, selected patients with more risk factors of developing cancer may benefit from mammography or ultrasonography studies. Psychiatric evaluation is necessary to be adopted for patients with mastalgia. GHQ questionnaire can be a useful aid to screen patients before referring to a specialized psychiatric center. Further studies are promised to completely reveal sensitivity and specificity of the GHQ questionnaire.

Declarations
Ethics approval and consent to participate: Ethic committee of Tehran University of Medical Sciences approved the study protocol. All patients signed the written informed consent according to the declaration of Helsinki 2013 principles.

Consent for publication
Availability of data and materials: The datasets used and/or analyzed during the current study are available from the corresponding author on reasonable request.

Conflict of Interest
The authors declare that they have no competing interests.

Funding
This study was performed using no special grant or funding. 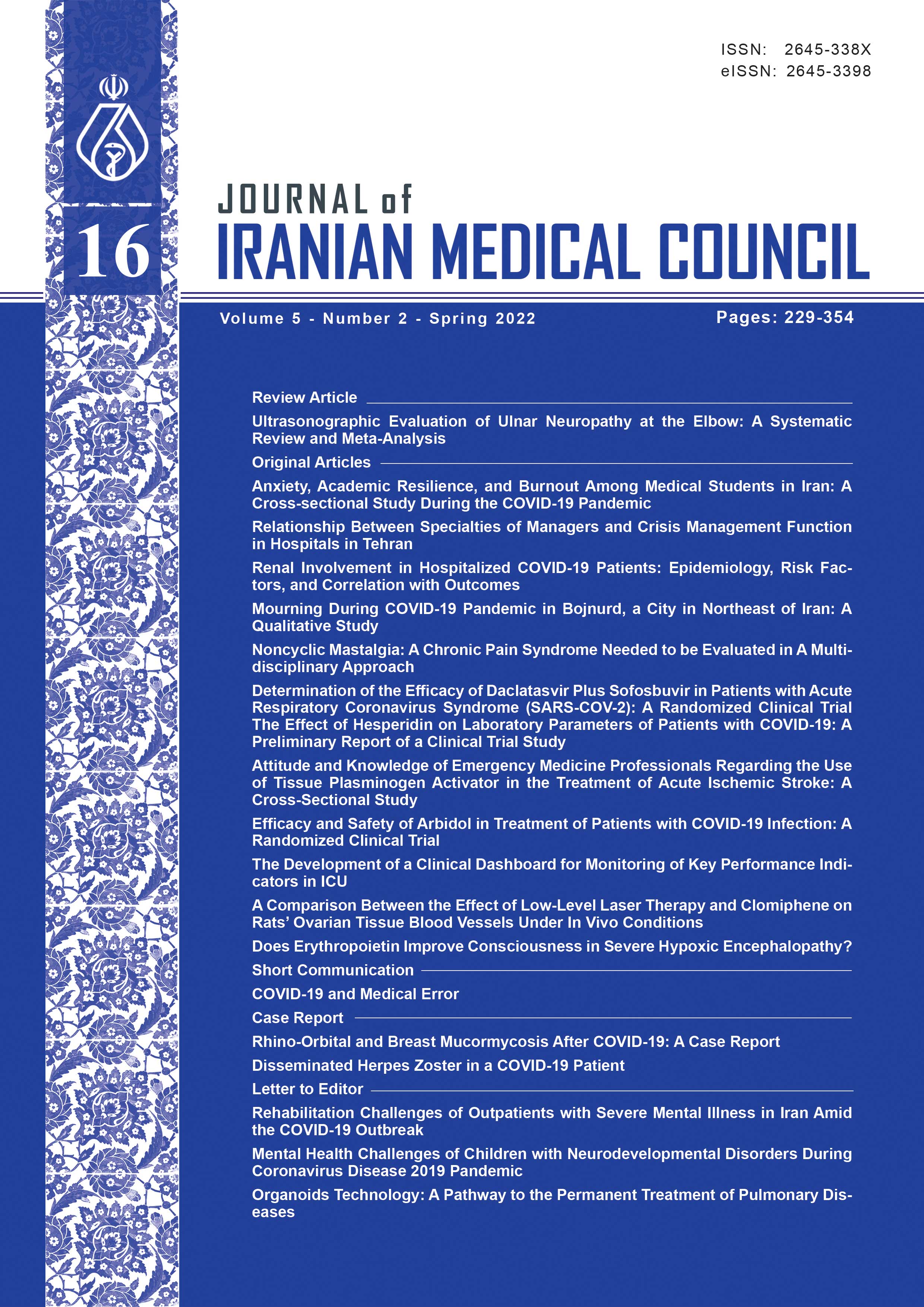