Introduction
Esophagitis and subsequent Barrett’s esophagus as complications of Gastroesophageal Reflux Disease (GERD) are the main risk factor for adenocarcinoma of the esophagus (1); hence, exploring ways to diagnose and evaluate GERD is of much importance. Diagnosis of GERD is based on clinical signs and symptoms; however, 24 hour pH monitoring or manometry of distal esophagus is used for therapeutic and surgical decision-making and the current gold-standard approach for evaluating distal esophagus is through Upper Gastrointestinal Endoscopy (UGIE) (1). In recent years, Ultrasonography (US), because of its availability and non-invasiveness as a diagnostic tool for GERD induced esophagitis has been evaluated. Through US, the anatomy, motion and movement of materials is easily assessable without affecting the natural physiology of the organ (2-4). Several studies have examined the utility of US for diagnosing GERD and its complications in infants and children (5-9). In addition, other studies have evaluated the usefulness of trans-abdominal and trans-cervical US for diagnosing GERD and its complications in adults in comparison with UGIE or other methods but there is discrepancy between the results (10-13). Therefore, through a double-blind clinical trial, the utility of trans-abdominal US was investigated for the diagnosis of GERD induced esophagitis in adults.

Materials and Methods
This double-blind clinical trial was performed on 83 patients visiting the gastrointestinal clinic of Shariati Hospital (Tehran University of Medical Sciences) from 2012-13. These patients were complaining from signs and symptoms of GERD without any history of surgery of other thoracic complaints. Informed written consent was obtained from each participant and also the proposal and design of this study have been approved by The Ethical Committee of Shariati hospital. Each patient then was evaluated for GERD and its complications by UGIE performed by one of the two experienced gastroenterologist. The presence of GERD induced esophagitis was assessed by Los Angeles classification (14). Within 15 days after endoscopy, participants underwent a trans-abdominal US performed by an experienced radiologist, in the Right side Up Oblique (RUO) position, after 3-6 hours of fasting, using MyLab 70 sonography unit, with multifrequency (2-7 MHZ) curved probe, on the left paramidline costal margin with 45 degrees facing xiphoid process. Then, the anterior-posterior diameter of esophagus at Gastroesophageal Junction (GEJ) and hiatus, length of abdominal esophagus, and the presence of a funnel shape were assessed. Moreover, the patients were asked to drink a glass of water and within 20 min, distal esophagus was evaluated for any signs of refluxed material.

Statistical Analysis
Data are shown as mean (±SD). The population was divided based on their endoscopy results into two groups: with or without GERD induced esophagitis and comparisons between these two were performed using Student’s T-test and Chi square.
Logistic regression analysis was used in the whole population to assess the relationship of each variable with the dichotomous outcome of endoscopy. Moreover, Receiver-Operating Characteristic Curve (ROC) was used and Area Under the Curve (AUC) for each variable was calculated. Furthermore, for finding significant relationships, the number of true and false positive and negative, sensitivity, specificity, Positive Predictive Value (PPV) and negative predictive value were calculated. Finally, the values of positive and negative Likelihood Ratios (LR) and Cohen’s Kappa were also calculated. All analyses were performed using SPSS Statistics, version 19.

Results
In 11 cases out of 83 patients, our radiologist was unable to accurately assess their distal esophagus because of their body habitus or so much bowel gas. From a total of 72 patients, 42 were women and 30 were men. Mean age of participants was 41.33 years, mean length of abdominal esophagus 40.94 mm, mean AP diameter of esophagus at hiatus 10.49 mm and mean AP diameter of esophagus at GEJ was 14.71 mm. In addition, funnel shape esophagus was observed in 29.8% of participants and reflux in 23.8%. Results of endoscopy were normal in 50 (69.4%) and positive for GERD induced esophagitis in 22 (30.6%) of participants. Comparison of the study variables between two groups of normal and positive endoscopy is illustrated in table 1. As shown, among all variables, only the observation of reflux had a significant difference between two groups, with a higher frequency in the positive endoscopy group (p value=0.007).
Results of logistic regression and ROC analyses are shown in tables 2 and 3. As illustrated, only the relationship of reflux observation with endoscopic findings was significant (Odds ratio= 5.32, p value=0.021, AUC=0.66). Furthermore, for diagnosing GERD induced esophagitis, the sensitivity of 45% and specificity of 86% were calculated. Calculated Cohen’s kappa was 0.33 which indicates a weak agreement between endoscopy and sonography in the diagnosis of GERD-induced esophagitis. Diagnostic ability determinants for this and other variables are shown in table 4.

Discussion
In this study which was performed on 72 participants with signs and symptoms of GERD, in comparing the diagnostic ability of trans-abdominal US for the diagnosis of esophagitis with endoscopy, it was shown that among all variables, observing the reflux using US has a moderate relationship with the existence of esophagitis having a sensitivity of 45% and specificity of 86%.
In this study, AP diameter of esophagus at hiatus and GEJ did not show any significant relationship with esophagitis. Likewise, Mohammadi et al have highlighted that esophageal wall thickness has a low sensitivity and specificity for diagnosing esophagitis (11). In addition, in a study performed by Tomita et al, esophageal wall thickness>5mm along with observing reflux in US had a sensitivity of 84.6% and specificity of 25% for esophagitis, whereas these variables were related to non-erosive GERD with a sensitivity of 91.1% and specificity of 89.4% (10).
Hiatal hernia is a known risk factor for GERD and its complications (15,16). Diagnosis of hiatal hernia is possible through calculating length of abdominal esophagus and its AP diameter at GEJ and hiatus (17,18). Several studies have assessed the validity of abdominal esophagus length and its diameter at hiatus for the diagnosis of GERD and its complications only in infants and children (5,6,9). Hashemi et al have shown that sonographic measurement of abdominal esophagus length and its diameter at hiatus are diagnostic of GERD (5). However, in the current study, none of the mentioned measurements were related to the presence of GERD induced esophagitis.
The presence of reflux in trans-abdominal sonography has a moderate diagnostic ability for GERD induced esophagitis. Likewise, Mádi-Szabó et al showed that a slow form of reflux which was visualized with US is related to esophagitis (12). Additionally, Kacar et al highlighted that observing the reflux in cervical esophagus using US is well associated with GERD defined by 24 hour pH monitoring (13). Moreover, Elbl et al also showed that visualized reflux of gastric materials back to esophagus by US is moderately related to GERD in infants (7). In the current study, reflux had a sensitivity of 45% and specificity of 86% and a PPV of 60% for the diagnosis of GERD induced esophagitis which demonstrates that our results were not by chance. Additionally, the calculated positive and negative LRs (Likelihood Ratio) (Which have to be the highest and lowest possible) were 3.23 and 1.56, respectively, which along with an AUC of 0.66 mean that observation of reflux in US has a moderate to low sensitivity for diagnosing GERD induced esophagitis. However, it must be noted that patients with non-erosive GERD as an outcome were not considered which must be stated as a limitation of this study.

Table 1. Comparison of variables between two groups of participants with positive and normal endoscopic findings

Data are mean (SD) or frequency

Table 2. Results of logistic regression analysis for each variable in relation to endoscopic findings

Table 3. Results of receiver operating characteristic curve analysis for each variable in relation to endoscopic findings

Table 4. Results of comparison between observing reflux in ultrasound and other variables and endoscopy in the detection of GERD-induced esophagitis

Conclusion
In conclusion, in this study which was designed to evaluate the ability of several variables for the diagnosis of GERD induced esophagitis, it was observed that only the presence of reflux in trans-abdominal endoscopy was related to the outcome with a moderate to low sensitivity. It can be suggested that future studies also include the non-erosive GERD as an outcome. Furthermore, studies should be designed to assess the ability of sonography in the clinical follow-up of GERD patients and their complications. Results of such studies can be helpful in designing cost efficient diagnostic and therapeutic strategies and algorithms for GERD and its complications. 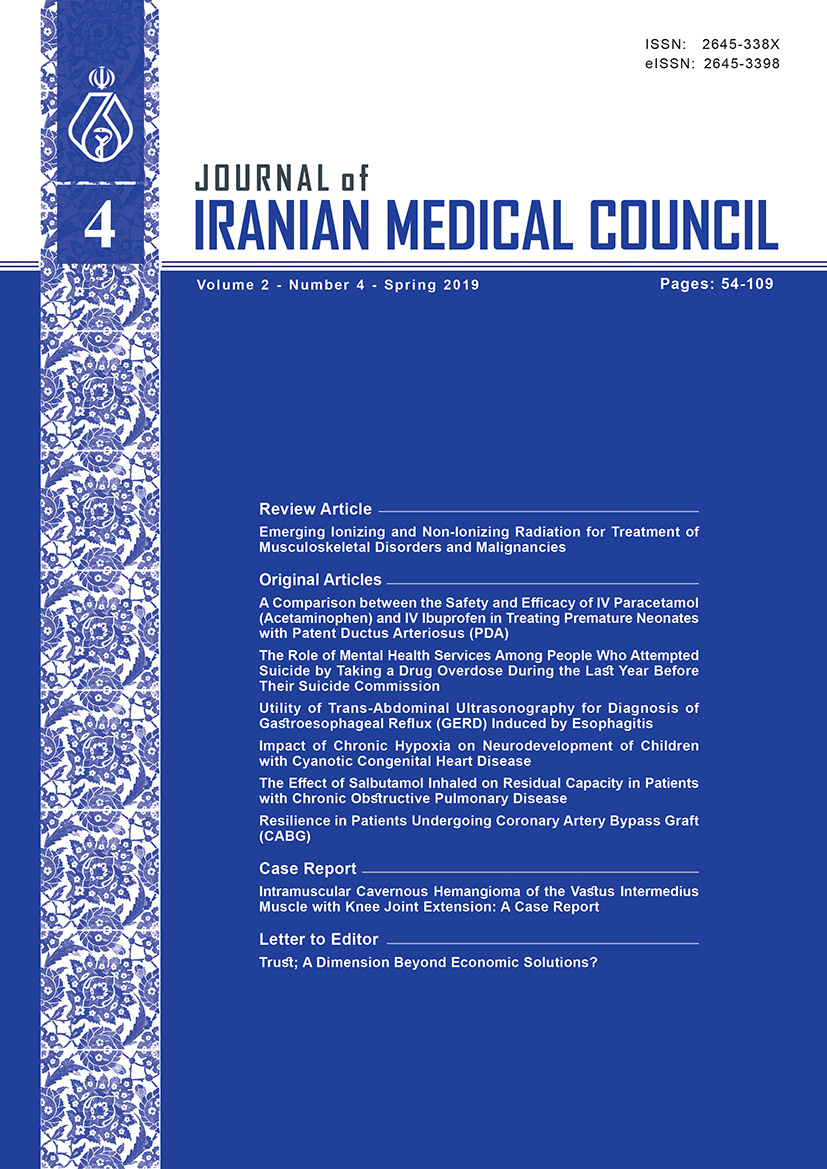