Abstract
Background: Over the past decade, there has been an increasing interest in exploring self-compassion as a related and complementary construct to mindfulness. Improved self-compassion may predict clinical outcomes after implementing Mindfulness-Based Stress Reduction (MBSR) approach and Compassion-Focused Therapy (CFT). This pilot study compared the impact of MBSR and CFT on self-compassion in people living with HIV, utilizing implicit and explicit instructions, respectively.
Methods: The present quasi-experimental study with pre-test, post-test, and follow-up design was conducted among people living with HIV referred to the Voluntary Counseling and Testing (VCT) center of Imam Khomeini Hospital in Tehran, Iran in which 54 patients were selected by convenient sampling. The interventions based on CFT and MBSR were applied to two experimental groups (18 people in each group) while the control group included 18 people who received no interventions and were placed on a waiting list. The experimental groups received the two interventions for 10 weekly sessions. Patients’ self-compassion was assessed at three stages of pre-test, post-test, and follow-up with a self-compassion scale. Descriptive and inferential statistics (analysis of covariance) were used to analyze the extracted data.
Results: The results showed that both interventions based on CFT and MBSR were effective in enhancing self-compassion of people living with HIV (p<0.05), and this effect remained consistent even during the follow-up stage (p=0.021). The changes were observable even three months after the treatment (p< 0.05).
Conclusion: This study demonstrated that MBSR and CFT can be effective in improving self-compassion among HIV positive patients. Besides, they can be helpful in developing preventive interventions.

Materials and Methods
This quasi-experimental study with pre-test, post-test, and follow-up design was conducted among people living with HIV referred to the Voluntary Counseling and Testing (VCT) center of Imam Khomeini Hospital in Tehran, Iran. This study was approved by Ministry of Health and Medical Education with the ethics code of IR.IAU.TON.REC.1399.04.
The statistical population of the study was all PLWH referred to Imam Khomeini Hospital. A statistical sample was extracted from 1284 PLWH at the VCT center of Imam Khomeini Hospital who had active records, and 296 people were included in the study based on Cochran’s formula.
Then, 54 patients were selected by convenient sam- pling. The interventions based on CFT and MBSR were applied for two experimental groups (18 people in each group). The control group included 18 people who received no interventions and were placed on a waiting list. The experimental groups received two interventions for 10 weekly sessions. Patients’ self-compassion was assessed at three stages during pre-test, post-test, and follow-up with the Self-Compassion Scale (SCS). Descriptive statistics and inferential statistics (analysis of covariance) were used to analyze the data.
The inclusion criteria of the study were as follows: PLWH with an active file, being aged 18-45 years, not having psychiatric disorders, not taking psychiatric drugs, not having substance dependence, and not receiving psychological treatment during the past 6 months. The exclusion criteria of the study were not attending 2 intervention sessions and use of any psychiatric medication. The Self-Compassion Scale (SCS) was used to homogenize the research population. In this case, scores lower than the cut-off point of SCS were used for sample selection.
The research participants completed a demographic questionnaire, SCS in the pre- and post-intervention phases, as well as three months after the intervention (follow-up stage). The study was of a double-blind design, as the investigator and participants were blind and only the first author who conducted the intervention was aware of the relevant data. The intervention group received eight 90-minute CFT sessions (based on Gilbert’s protocol); however, the control group received no intervention. During the research process, 2 subjects from the experimental group and 2 control subjects were removed, due to unwillingness to continue the research.
SCS (14) consisted of 26 items that was rated on a five-point Likert scale; next, comparisons of the positive and negative aspects of the three main factors of self-compassion including comparisons between self-kindness and self-judgement, common humanity  and isolation, and mindfulness and over identification was done by the scale. Birnie et al (30) reported high internal consistency for SCS subscales (α=0.77–0.81) and overall high convergent and discriminant validity. This measure has been criticized because of its factor structure (31,32); however, it was selected to provide comparative insights regarding the effect size of self-compassion variable. In addition, due to the existence of the mindfulness subscale, overlap between variables should be considered.

Table 3. Results of univariate analysis of covariance to determine the difference in the effect of compassion-focused therapy (CFT)

Table 4. Average scores of compassion variable obtained by comparing different therapies based on the type of treatment

Results
Normal distribution of data
To determine the type of statistical test for data analysis, the normality of the data distribution was determined by Shapiro-Wilk test. As table 1 depicts, the results of Shapiro-Wilk test analysis showed that the statistical values obtained in the pre-test and post-test of the experimental groups and the control group were more than the critical value (α=0.05). Thus, the data was normally distributed. Also, since the values of skewness and kurtosis were between -2 to 2, the data distribution was normal.
The data obtained from the questionnaires at pre-test and post-test stages of the experiment were analyzed by appropriate statistical methods, the results of which are as follows. The mean age of cases in the study groups was 37 years, among whom nearly 61% were male and 59% were female.
As table 2 shows, the mean and standard deviation of self-compassion subscale in the first experimental group CFT were 95.28±18.39 in the pre-test, 112.94±5.66 in the post-test, and 114.94±5.90 in the follow-up. In the second experimental group (MBSR program), these values were 95.44±12.62, 102.05±12.76, 104.22±12.21 in pre-test, post-test, and follow-up, respectively. Finally, in the control group, they were equal to 95.55±15.50, 95.72±15.90, and 95.83±15.27, respectively during the above mentioned periods. The results showed a significant increase in scores in the experimental group, but the difference was not observed in post-test and follow-up phases.
As it can be seen in table 3, the f-ratio from the analysis of covariance indicates that after eliminating the effects of the auxiliary random variable (pre-test), there was a statistically significant difference between the adjusted scores of self-compassion in the post-test phase (F=975.10; p=0.001). As a result of having two experimental and one control groups, the effectiveness of CFT and MBSR training has been different on patients’ self-compassion in the Practice Educator Professional Standards (PEPS) stage of the test. The eta squared shows that 97.5% of the changes or increases in the rate of self-compassion in PLWH were due to the effect of treatment methods.
The mean value in post-test and follow-up stage in the CFT group was equal to 2, compared to 2.17 using BSR and in the control group, the obtained value was -0.056.
F-Ratio obtained from analysis of variance indicated that there was a statistically significant difference between the scores of self-compassion from the post-test stage to the follow-up stage (p=0.006).
As shown in table 4, the results of the Scheffe test indicated that there was not a difference between the effects of CFT and MBSR on self-compassion (MD=0.167; p>0.05). There was no statistically significant difference between patients so the effect of CFT and MBSR therapy on patients’ self-compassion remained consistent from the post-test to follow-up stage. On the other hand, the observed differences between each treatment group and the control group were statistically significant.

Conclusion
The results of the present study showed that compassion-based therapy had a greater effect on reducing self-compassion in patients than MBSR therapy. This finding may be due to the key principles of CFT that are to motivate individuals to care for their well-being, to become sensitive to personal needs and distress, and to extend warmth and understanding towards themselves. CFT involves developing key compassionate attributes and the skills of compassion. Individuals are encouraged to reflect on the key attributes of compassion and practice the skills needed to develop them. For example, skills training includes learning to direct attention compassionately, behave, think, reason, and respond to emotions in a compassionate way and use imagery to cultivate a compassionate mind. Individuals are taught to employ self-soothing activities, adaptive coping strategies, courage, and acts of kindness (17). These findings are in line with the results of a study conducted by Beaumont et al (50) regarding the effectiveness of CFT in self-compassion development. In conclusion, the findings from the current study suggest that both MBSR and CFT are effective in enhancing self-compassion in HIV patients.

Acknowledgements
The researchers would like to acknowledge the assistance of all colleagues of the VCT center of Imam Khomeini Hospital who cooperated in the implementation of the project, as well as all men and women who participated in this research project. This study was approved by Ministry of Health and Medical Education with the ethics code of “IR.IAU.TON.REC.1399.04”.

Conflict of Interest
The authors report no conflict of interest. 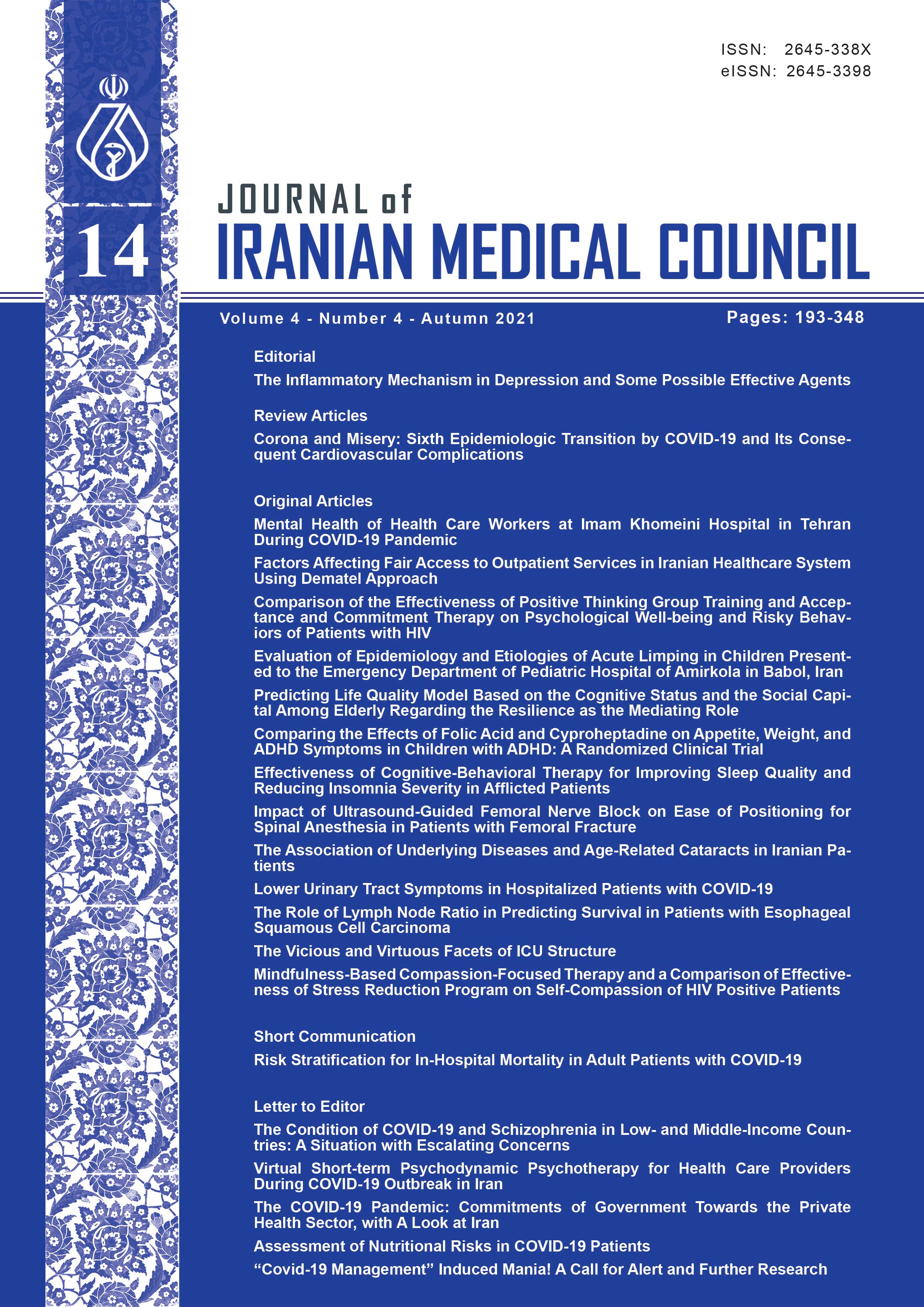