Background: Although smaller studies have shown that the P-wave morphology from different anatomic locations, a detailed algorithm which characterizes the likely location of a tachycardia associated with a P-wave of unknown origin is still lacking. The purpose of this study was: 1) to perform a detailed analysis of the P-wave morphology in Focal Atrial Tachycardia (FAT) and to produce an algorithm for identification of the anatomic site of origin, and 2) to evaluate the clinical and electrophysiological characteristics of FAT.
Methods: In this retrospective study 146 patients underwent radiofrequency catheter ablation for right and left FATs and their clinical, electrocardiographic, and electrophysiological characteristics were included.
Results: One hundred forty-six patients with FAT were included in the study (56% of them were female, mean age: 46±15 years, age range: from 15 to 86 years). The distribution of Atrial Tachycardia (AT) was 78% in right atrial and 22% in left atrial region. The most common site for right-sided ATs was crista terminal is while pulmonary vein was the most common origin for the left ATs. A female predominance of 60% was seen in right-sided AT and a male predominance of 60% was among left-sided tachycardias (p=0.04). Lead V1 was the most useful lead to distinguish right tachycardias from the left one. Atrial electrogram-P wave interval at successful ablation site was significantly longer among left-sided ATs (45±7 vs. 41±7 ms, p=0.006).
Conclusion: This study shows a significant gender differences between right and left ATs. Leads V1 and I were the most useful leads to localize the FAT. Proposed P-wave algorithm could determine the likely origin of tachycardia in 95% of the patients.

Introduction
Sustained Focal Atrial Tachycardia (FAT) is an uncommon form (5-15%) of supraventricular tachycardias 1. The specific anatomic structures determine the preferential sites of origin of FAT. In the Right Atrium (RA), arrhythmia origins from the cluster at the Crista Terminalis (CT) 2. Other right-ided foci are distributed within the Tricuspid Annulus (TA) 3, the Ostium of the Coronary Sinus (CS-OS) 4, the Right Atrial Appendage (RAA) 5, and the perinodal region 6. Left-sided FATs predominantly originate from the Pulmonary Vein (PV) ostia 7 and less commonly from the Mitral Annulus (MA) 8, the Left Atrial Appendage (LAA) 9, and the left-sided septum 10.
Medical management of FAT is difficult in the majority of the patients. Fortunately, Radiofrequency Catheter Ablation (RFCA) revolutionized the treatment of the FAT with short and long-term success 11,12. Although successful ablation depends eventually on detailed mapping, the 12-lead Electrocardiogram (ECG) is nonetheless a very useful tool in guiding catheter ablation. Several studies have previously described P-wave morphologies related to atrial arrhythmias originating from specific anatomic regions; however, there is a few practical algorithms to localize the tachycardia origin before procedure 13,14.
The aim of present study is to develop a new algorithm and to prospectively evaluate the clinical utility of it in localizing the origin of tachycardia throughout detailed analysis of P-wave Morphology (PWM) on the surface ECG.

Patients and Methods
Study population: The study population consisted of a consecutive series of 146 patients (mean age: 46.0±15.5 years, range: 15-86 years) who had undergone RFCA for FATs. All patients had clinically documented paroxysmal or incessant Atrial Tachycardia (AT). Patients with multiple AT morphologies were excluded. The study protocol was approved by local Ethics Committee and all patients provided written informed consents before electrophysiological study and catheter ablation taking place.
Electrophysiology study and catheter ablation: All antiarrhythmic drugs were discontinued at least 5 half-lives before the procedure. The procedure was performed in the fasting state with infusion of a mild intravenous sedation such as fentanyl and midazolam. Catheter positioning and the approach used in our laboratory for ablation of AT was based on standard electrophysiological methods. Briefly, three quadripolar catheters were positioned into the High Right Atrium (HRA), HIS Bundle region (HB), and Right Ventricular apex (RVA). A multipolar catheter was placed in the Coronary Sinus (CS) for recording CS and Left Atrial (LA) activity. A trans-septal puncture was performed using an 8.5 F Agilis™ steerable introducer and 98 cm BRK™ trans-septal needle (St. Jude Medical Inc., Minnetonka, USA) for patients who required LA mapping and ablation.
Standard electrophysiological criterion was used to confirm FAT diagnosis: that included the inability to demonstrate entrainment at two locations with characteristics of being “in the circuit” and greater than 2 cm apart 15. Attempts at arrhythmia induction were made using atrial programmed extra stimulation and burst atrial pacing. If this was unsuccessful or when AT did not occur spontaneously, then isoproterenol was infused. Anatomic localization of the atrial focus was performed during tachycardia or atrial ectopy by analysis of surface P-wave Morphology (PWM) and atrial endocardial activation sequence during tachycardia. On the basis of the provisional findings from PWM and the atrial endocardial sequence from standard catheters, point mapping to locate the site of earliest endocardial activation relative to surface P-wave (in lead V1) onset was performed with a 4-mm tip mapping/ablation catheter.
P-wave morphology: Surface ECG PWM was analysed during periods of atrioventricular block or after ventricular pacing. P waves were included for analysis only if an isoelectric interval was present and there was no fusion with the preceding QRS or T-wave. P-waves were described on the basis of the deviation from baseline during the T-P segment as being: 1) positive (+); 2) negative (-); 3) isoelectric: no P-wave deviation from a baseline; and 4) biphasic (+/- or -/+). Sensitivity, specificity, Positive Predictive Value (PPV), and Negative Predictive Values (NPVs) were calculated as the distinguishing features at each site.
Development of ECG algorithm: On the basis of the tabulated P-wave features for each anatomic location, an algorithm was developed to determine anatomic site of the origin of tachycardia. The algorithm was modified and tested against ten P-waves randomly selected from the original population until an accuracy of 95% was achieved.
Prospective application of the algorithm: The algorithm was prospectively applied, by 2 blinded observers to a new population of 20 consecutive patients with focal AT who underwent successful RFA. The observer described the PWM as defined earlier. Also the algorithm was strictly followed.
Statistical analysis: All variables are expressed as mean SD. Comparisons between groups were performed with either an unpaired Student t test or, where a normal distribution could not be assumed, the Mann-Whitney U test was carried out. Categorical variables expressed as numbers and percentages were compared with a chi-square test. A p value of 0.05 was considered statistically significant.

Discussion
Our findings show that: 1) there is significant gender differences between right and left FATs; 2) FATs tend to have particular anatomic distributions in the right and left atria and these anatomic locations are highly predictable by characteristic PWMs; 3) left-sided FATs presented with significantly longer atrial electrogram-P wave interval at successful ablation site.
Gender differences: Gender differences have been clearly reported in certain types of supraventricular tachycardia. A clear female predominance has been observed in atrioventricular nodal re-entrant tachycardia, whereas accessory pathway-mediated tachycardia was more frequent in men. There are few data on gender-related differences in FAT, however Rodriguez et al 16 reported a similar proportion of AT between men and women. Similarly, Hu et al 17 found no gender-related differences in 298 patients with FATs. In a study by Porter et al 18, AT comprised a similar proportion among men and women. The present study confirmed the results of prior studies in all study subjects. However, subgroup analysis showed a female predominance in right-sided ATs and a male predominance in left-sided ATs. Hu et al 17 reported a similar left atrial involvement between men and women with FAT. This discrepancy may be explained by differences in mean age of the men and women. Mean age of men was higher than women in Hu et al study 17; however, women were older than men in the present study.
Electrocardiographic differentiation of right and left FAT: Detection of origin of arrhythmia has important implications for planning ablation procedure. In the present study, PWM in lead V1 was the best discriminator for distinguishing right from left ATs. A negative or positive-negative P-wave in lead V1 was 100% specific for RA-AT, while it was 100% sensitive for LA-AT. Lead I was the second most useful lead; a negative or isoelectric P-wave in this lead was highly specific (90%) for LA-AT: A positive P-wave in lead I was highly sensitive (96%) for RA-AT. The least useful lead was aVL; a negative P-wave in aVL was associated with a moderate sensitivity of 73% for LA-AT and a positive P-wave had a moderate specificity of 75% for RA-AT. Precordial lead V1 is recording ECG from right-anterior part of the thorax, therefore, this lead can easily distinguish electrical data of RA free wall (right and anterior structure) from LA free wall (left and posterior structure). However, frontal leads I and aVL gather electrical activity of the heart from high lateral position. Therefore, these leads may be more useful to distinguish electrical activity of superior structures (high crista, PV) from inferior structures (CS-OS, posterior TV, and Posterior MA). This may explain why lead V1 was more useful than leads I and aVL.
There are limited studies on P-wave analysis of FAT. In a very first study, Tang et al 14 investigated P-wave PWM in 31 patients with FAT, where leads V1 and aVL were most beneficial leads in distinguishing right from left AT. In another study, Kistler et al 13 performed a detailed analysis of PWM on 126 patients with FAT, and they found that the most useful lead for right vs. left AT differentiation was V1. In both studies, the main disadvantage of V1 was related to the fact that positive P-wave could not distinguish between tachycardia originating from high CT from that from RSPV. Both studies reported an interesting observation. RSPV ATs showed a change in PWM from positive-negative in SR to positive in tachycardia, however, CT AT showed an identical morphology in SR and tachycardia. We observed similar change in PWM from biphasic (positive-negative) in SR to positive in tachycardia in 5 patients out of 8 with RSPV AT, but not in any with CT AT.
The spatial limitation of PWM analysis are highlighted in localizing septal AT. The prior studies reported significant overlap in PWM of right- and left-sided septal AT. We confirmed this observation in our series.
Electrophysiological characteristics of FAT: Mean endocardial activation time at successful ablation site was significantly longer in left-sided ATs (45±7 vs. 41±7 ms, p=0.006). This finding can be explained by the fact that activation timing was measured from the onset of the P-wave in lead V1 of the surface ECG (arbitrarily assigned a time of 0 ms) to the distal bipoles of ablation catheters. Lead V1 is closer to right-sided tachycardia foci than left-sided tachycardia origins. Spontaneous initiation or induction of isoproterenol and then refractoriness to overdrive pacing are all in favour of abnormal automaticity as the major mechanism for left-sided ATs. However, induction and termination by programmed stimulation are supportive of micro-re-entry or triggered activity as the main mechanisms for the RA-AT. These differences in mechanisms of tachycardia are mainly related to the dominant site of origin of tachycardias.
Study limitations: The results of the present study should be interpreted in the light of certain limitations: first of all our results cannot be extrapolated to the macrorentrant atrial tachycardias in the setting of operated or unoperated congenital heart disease, extensive linear atrial ablation (such as AF ablation), and extensive atrial scaring. Secondly we had no cases of AT originating from Superior Vena Cava (SVC), Inferior Vena Cava (IVC), aortic cusps, and ligament of Marshall.

Conclusion
This study shows significant gender differences between right and left ATs. Leads V1 and I were the most useful leads to localize the origin of FAT. Proposed P-wave algorithm could determine the likely origin of tachycardia in 95% of the patients. 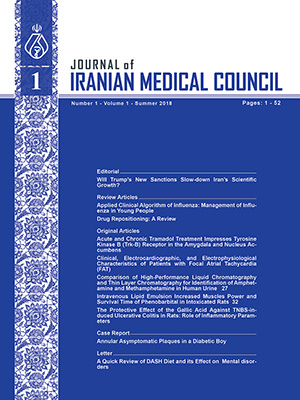