Prevalence, Demographic Characteristics and Comorbid Psychiatric Disorders in Children and Adolescents with Substance Use Disorder in Iran

Introduction
Unhealthy behaviors such as smoking and alcohol/drugs abuse often begin in adolescence (1). These behaviors create a major challenge to the public health since they increase mortality and morbidity rate (2). Despite the prohibition of drug use, evidence suggests that the consumption of alcohol, tobacco, and marijuana is considerable among adolescents aged 12 to 17 years (3). In the United States, about half of 18-year-old adolescents have consumed narcotics at least once in their lives (4). In Europe, on average, 21% of boys and 15% of girls aged 15 to 16 have used illegal drugs at least once in their lives (5). A longitudinal study indicates a high prevalence of alcohol, marijuana and cigarette smoking in adolescents in Europe (34.1%) (6). Evidence suggests that drug use among adolescents has increased dramatically in Iran (7-9). The results of  Momtazi and Rawson’s study on Iranian students showed at least one instance of alcohol use in the lifetime of students (9.90%) and prevalence of substance use disorder about 1.20% and 6.60% in different regions of Iran (10). Mohammadkhani’s study indicated that cigarettes (14.70%) and alcoholic beverages (9.80%) were the most prevalent materials used in lifetime of Iranian students and the prevalence of other substances was 2.50% (7).
Another concern of the study is the connection between substance abuse and the existence of psychiatric comorbidities in adolescence. A key factor for understanding the causes, history and
treatment of substance abuse is knowing the comorbidities associated with substance abuse (11). Some studies have also shown that drug abuse is associated with psychiatric disorders such as oppositional defiant disorder, hyperactivity and attention deficit disorder, behavioral disorders, depression and anxiety (12-16). Between 55 and 88% of adolescents with substance abuse show the criteria for one of the psychiatric disorders such as functional disorder, depression, anxiety or hyperactivity (17).
Research has suggested that comorbid psychiatric disorders in adolescents is related to higher levels of functional disorder including legal problems, mental health issues, family functioning problems, mixed abuse of drugs, and poor outcome of treatment (18,19).
The purpose of this study was to determine the status of substance use disorder in children and adolescents related to the demographic characteristics (e.g., age, gender, place of residence, occupation and education of parents) and to investigate the likelihood of associated comorbidities. Childhood and adolescence are the critical periods of life determining the health and well-being of society in future. Due to the fact that Iran is situated in a special geographical area (a potential region for drug trafficking route), the status of substance use disorder particularly in children and adolescence needs to be consistently examined. In addition, there is not adequate information regarding the prevalence of different types of substance abuse in this population. It should be noted that the current study was first of its kind in magnitude and data collection in Iran. Not only it focuses on the prevalence of substance use disorder in children and adolescence, it also targets the comorbid disorders in children and adolescents with substance use disorder. The current study was conducted in two stages. First substance use disorder in children and adolescents was studied in relation to age, gender, place of residence, occupation and education of parents and second, the probability of other psychiatric comorbidities was studied. The results of the study would help us to have better assessment of substance use disorder and the comorbid disorders (particularly in Iranian population) for guiding prevention and treatment policies.

Materials and Methods
Sampling
The national cross-sectional survey was conducted on 30,532 children and adolescents in 29 provinces in Iran. Multistage cluster sampling method was utilized and on average 1000 people were selected from each province. In addition to the main cities, participants from the rural population of each city were randomly selected (using cluster sampling). For this study, the counties and the villages of the subsidiary were divided into 167 clusters based on the postcodes. Then the clusters were divided into blocks of six and in each block one girl and one boy from each age group of 9-6, 10-14, and 15-18 years old were included (20).

Data Collection
Initially, eight clinical psychologists and a total of 240 psychologists were selected from each province. Next, these psychologists were trained how to use Kiddie-SADS-Present and Lifetime Version (K-SADS-PL) questionnaire for the purpose of the study. The trained clinical psychologists identified the eligible people and invited their parents to participate in the study. For being eligible, the participants needed to be within the age ranges of 6-10, 10-14, and 14-18 and number of participants in each age range required to be equal. It should be noted that K-SADS-PL was based on DSM IV criteria. Due to the fact that we considered four criteria for diagnosing substance use disorder, it can be argued that the substance use disorder in the current study was in the range of moderate intensity in terms of DSM V criteria.
After obtaining consent from the parents, demographic data were collected from children and adolescents. To collect demographic data, the participants were asked questions about age, place of residence, parents’ occupations, and parents’ education level. Afterwards, K-SADS-PL questionnaires were completed on the basis of the interviews with participants. In case of participants under 11 years old, both participants and their parents were interviewed using K-SADS-PL, but for those above 11, the participants were interviewed directly using the same instrument. The location of the interviewers and their place in the designated clusters were monitored every day by the provincial observers via the Internet locator (GPS). The provincial observers had been assigned to monitor the data collection process to ensure data are collected in line with data collection procedures.

Instruments
Semi-structured diagnostic interview by the help of Kiddie-SADS-Present and Lifetime Version: This semi-structured interview was designed to assess the current and past episodes of mental illness in children and adolescents. It included 5 groups of diagnosis:
1) mood disorders including depression disorders (major depression and dysthymia), mania, and hypomania 2) psychotic disorders, 3) anxiety disorders including social phobia, agoraphobia, specific phobia, obsessive-compulsive disorder, separation anxiety disorder, general anxiety disorder, panic disorder and post-traumatic stress disorder 4) behavioral disorders including ADHD, conduct disorder, oppositional defiant disorder and 5) drug abuse, tick disorders, eating disorders and elimination disorder (21). The interview questions were based on items of Kiddie-SADS-Present and Lifetime questionnaire. This questionnaire bases the diagnosis on the fourth diagnostic manual for mental illness and its third revision. Interviews start with questions about demographic information. In addition, information on previous psychiatric problems can also be obtained (22). The completion of the questionnaires was based on information from interviews with parents and children and all other available resources.
The Persian version of this questionnaire had high sensitivity and indices of 0.81 and 0.69 have been reported for its validity of and test-retest reliability (20). In a study, Kappa coefficient was reported 0.93 (p<0.001) for emotional disorders, 0.9 (p<0.001) for anxiety disorders, and 0.94 (p<0.001) for ADHD and behavioral disorders (23). In the current study, the reliability of instrument was also estimated using internal consistency measure of Cronbach’s Alpha which indicated adequate reliability (α>0.70).

Analysis
Data collected from the provinces of Iran were screened by removing the cases with incomplete information. To study the variables related to demographic characteristics, frequency statistics using Chi Square was employed. Logistic regression was also utilized to determine predictors of substance use disorder with a confidence interval of 95%. The independent variables for predicting substance use disorder included demographic characteristics and psychiatric comorbidities. All the statistical analyses were done using SPSS 21.

Ethical considerations
This study is approved by the national institute for medical research development (NIMAD) ethics committee (code of ethics: IR.NIMAD.REC.1395.001 and grant number: 940906). In this study, maximum efforts were put into practice to ensure individuals are treated equally and there is no harm to anyone. All the individuals participated voluntarily and signed the informed consent form. In addition, all the information from the participants remained confidential and anonymity was observed throughout the study.

Results
A total of 30532 children and adolescents aged 6-18 years participated in this cross-sectional study. Out of 30532 participants, 28,540 people were included in the study, and the rest were excluded due to incomplete information about substance abuse. Furthermore, 13936 (48.80%) were girls and 14604 (51.20%) were boys. With regard to place of residence, 23829 (83.50%) were living in cities and 4711 (16.50%) in villages. The overall prevalence of psychiatric disorders in children and adolescents was 28.2%.
In this study, a total of 277 participants were identified as people with substance use disorder. Table 1 shows the prevalence of any unprescribed use among children and adolescents. The use of hypnotic/sedative/anti-anxiety drugs was seen in 84 cases (46.15%), cannabis in 68 cases (37.36%) and stimulants in 43 cases (23.63%), all of which had the highest prevalence among other drugs.

Table 1. The ratio of each drug to the total sample and in people with substance use disorder

* There is overlap across different types of substance abuse

Table 2. Distribution of substance and alcohol abuse based on socio-demographic characteristics

Psychiatric comorbidities in children and ad-olescents consuming substances and alcohol
The investigation of comorbidities in children and adolescents consuming alcohol and substance showed that in general, 42.5% of children and adolescents were suffering from comorbid disorders (Table 4). Based on the statistics, substance use disorder had the highest comorbidity with behavioral disorders (p=22, 95% CI=17-28) and among the behavioral disorders, oppositional defiant disorder had the highest prevalence (p=13.7, 95% CI=9.8-18.9). The next highest prevalent comorbid disorder was anxiety disorder (p=18.8, 95% CI=14.2-24.5) and among the anxiety disorders, separation anxiety disorder had the highest prevalence (p=7.9, 95% CI=4.9-12.1).

Table 3. Odds ratios (95% CI) for substance and alcohol abuse based on socio-demographic characteristics

Table 4. Prevalence of Psychiatric Disorders in Children and Adolescents with Substance and Alcohol Abuse (N:356)

Ethics approval
This study was approved by the national institute for medical research development (NIMAD) ethics committee (the ethics code of IR.NIMAD.REC.1395.001 and grant number of 940906).

Acknowledgements
The authors acknowledge with grateful appreciation the kind assistance provided by the Vice Chancellor for Research at North Khorasan University of Medical Sciences. We also thank all the psychologists and colleagues from all the provinces for their collaboration.

Conflict of Interest
The authors declare that they have no conflict of interest. 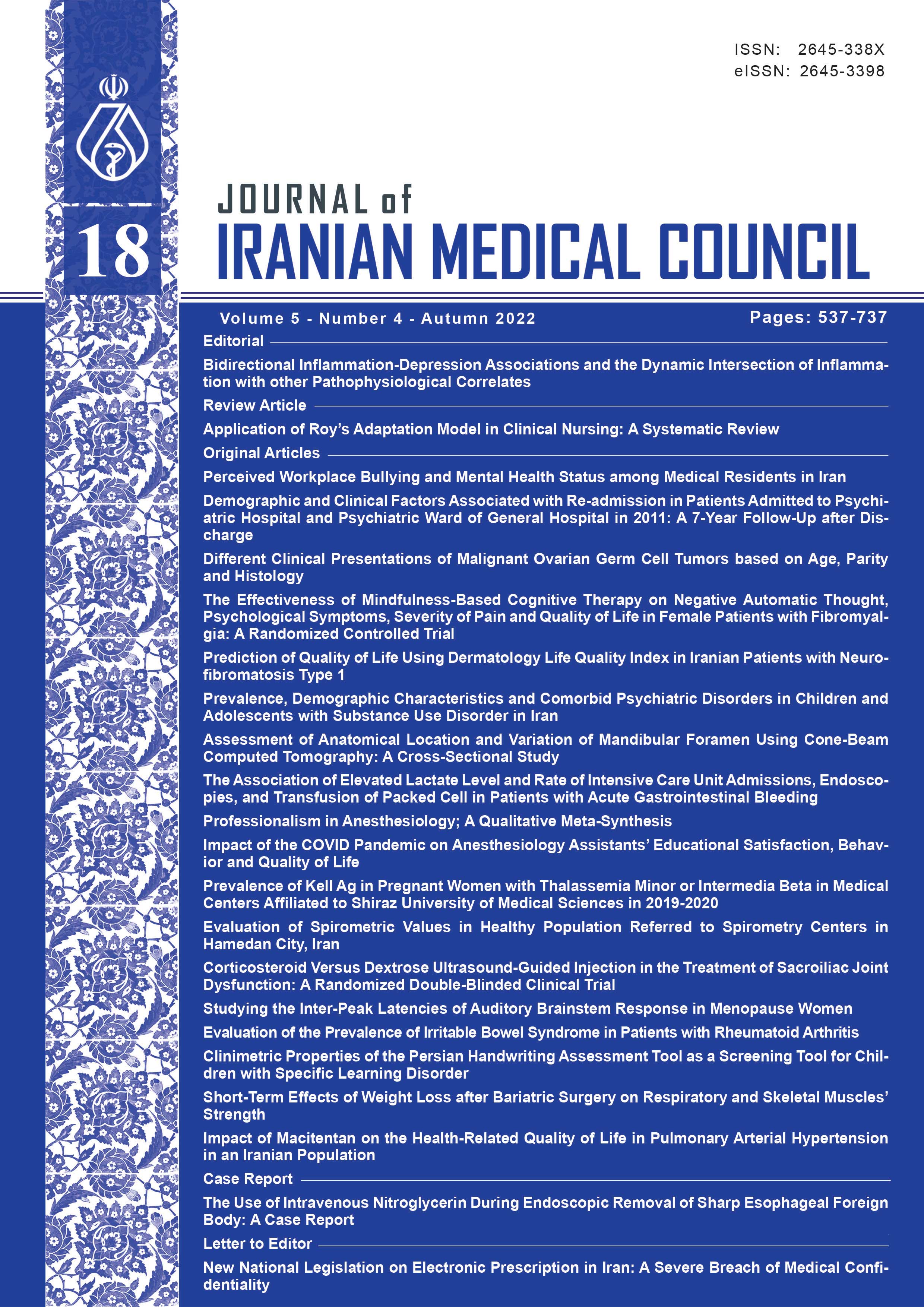